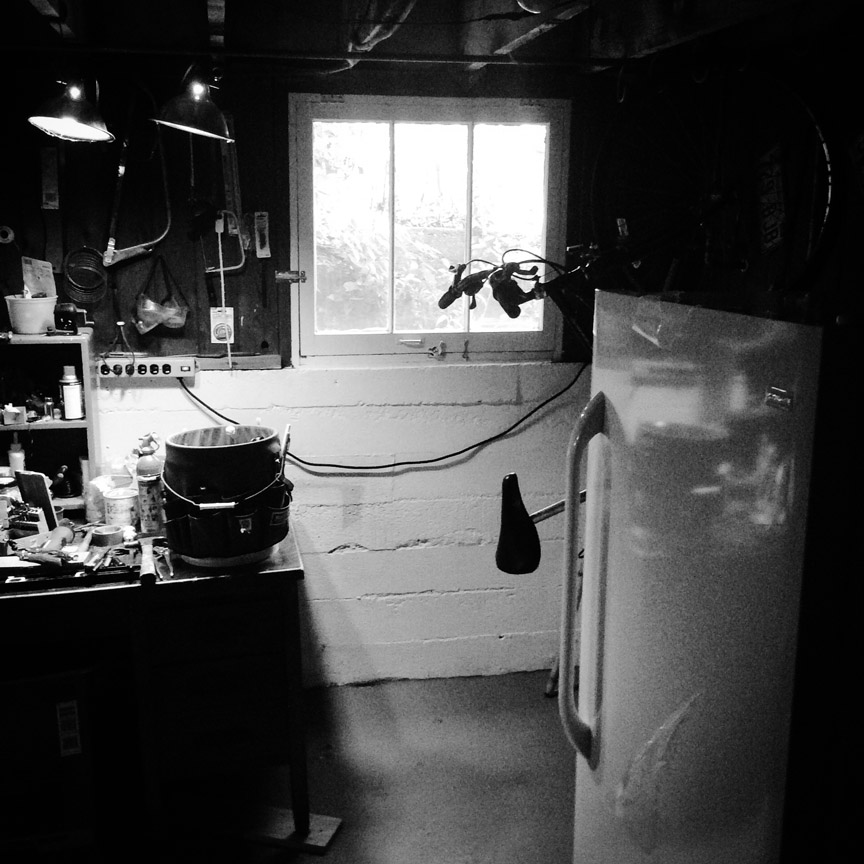 Yesterday we had a new freezer delivered (old one died). It was bought online and the delivery notification was via a computer robot voice phone call. The robot even called with a 30 minute warning. So sure as shooting, there the truck was, just like the robot said.

The truck parked in the alley. It turned out that the two freezer delivery men were from Africa - or more precisely from Burkina-Faso!

One tall laid back cool guy in sunglasses (Djbril) and another guy who sounded like he'd might have a college degree with excellent english (Mathieu). They unloaded the freezer and began to carry it through my backyard, with a shoulder strap harness. At this point I remembered we were supposed to ask them for I.D. to prove that they really were the people who were supposed to be carrying a freezer through my backyard instead of some dangerous impostor freezer-carriers hellbent on getting that freezer down an impossible stairway and back door. But I went on trust.

Of course the first problem was the freezer wouldn't actually fit through the back door - even though I had taken the back door off. They don't make slim freezers anymore. They're all gigantic now. And this was the smallest freezer I could find anywhere online.  Oh no! Mathieu suggested we remove the extra panel that stuck out at the bottom. I got down on the ground sideways to try to see where the screws were. Excellent idea. We tried to get that off - but it didn't work.

There was some discussion in Bukina-Fasese and shaking of heads. It looked like they were about to give up and pack it back up to return. Oh no! Then it occurred to me we should try the basement window. Lo and behold - it measured out with 3 inches to spare! Djbril and Mathieu carried the freezer around to the side window. And in it went.

I got to chat a bit with Djbril, telling him that my dad had spent 6 years in Ghana, which is the nation just south of his. He said he'd never been there, but they had lots of tasty food in Burkina-Faso. Also that a good deal of french is spoken in Burkina-Faso.

I tried to not feel too guilty about my fat comfortable life as I imagined what kind of life a refugee from Africa must have had to wind up delivering freezers to cold, wet Seattle half a world away. I'm glad we managed to get the freezer in through the window so at least that little adventure ended happily ever after.

Corn is hard to paint! 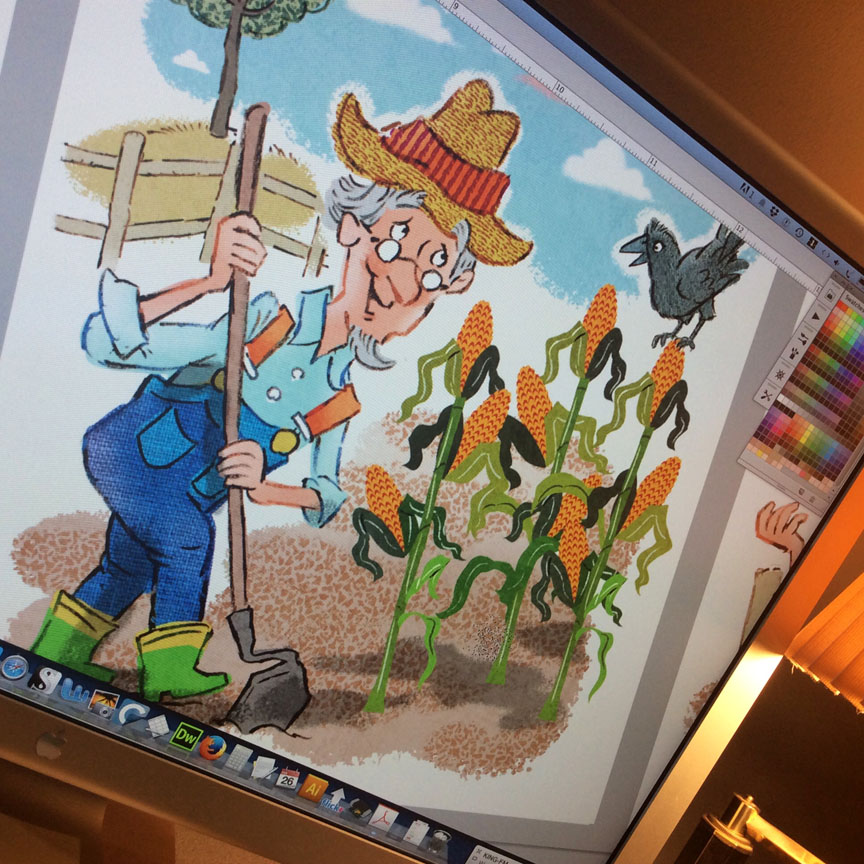 Today's blog theme is farms and work. I tried to recapture the feeling of a kitchen I once had.  It was decorated with the most amazing 1940's wallpaper done in a vintage farm design.  And it had all the original counters, cupboards and stove.

I discovered that corn is difficult to paint!  Too many parts... that's the problem.  Bicycles are difficult also. 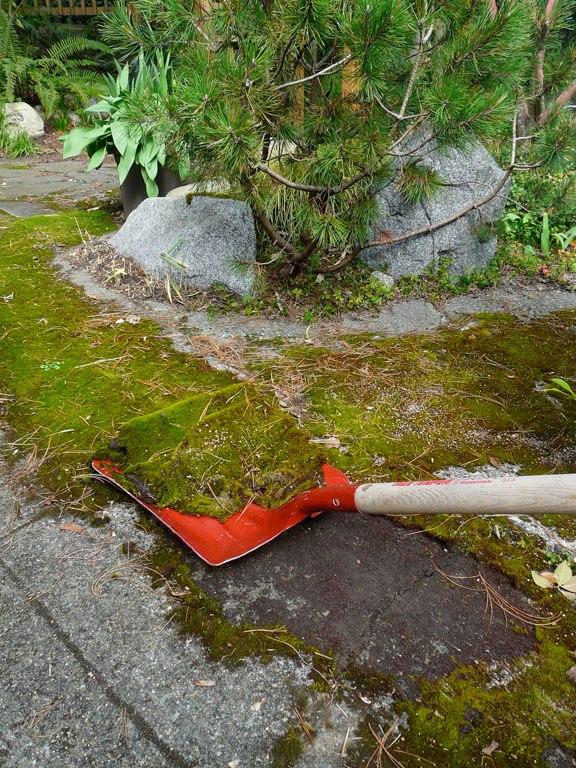 And this photo is for all those poor folks who have had to shovel way too much snow this year!  Here in the pacific northwest we too have to shovel moss.  Hard work!
Posted by John Nez at 8:56 AM No comments:

My mind - My mind in Photoshop 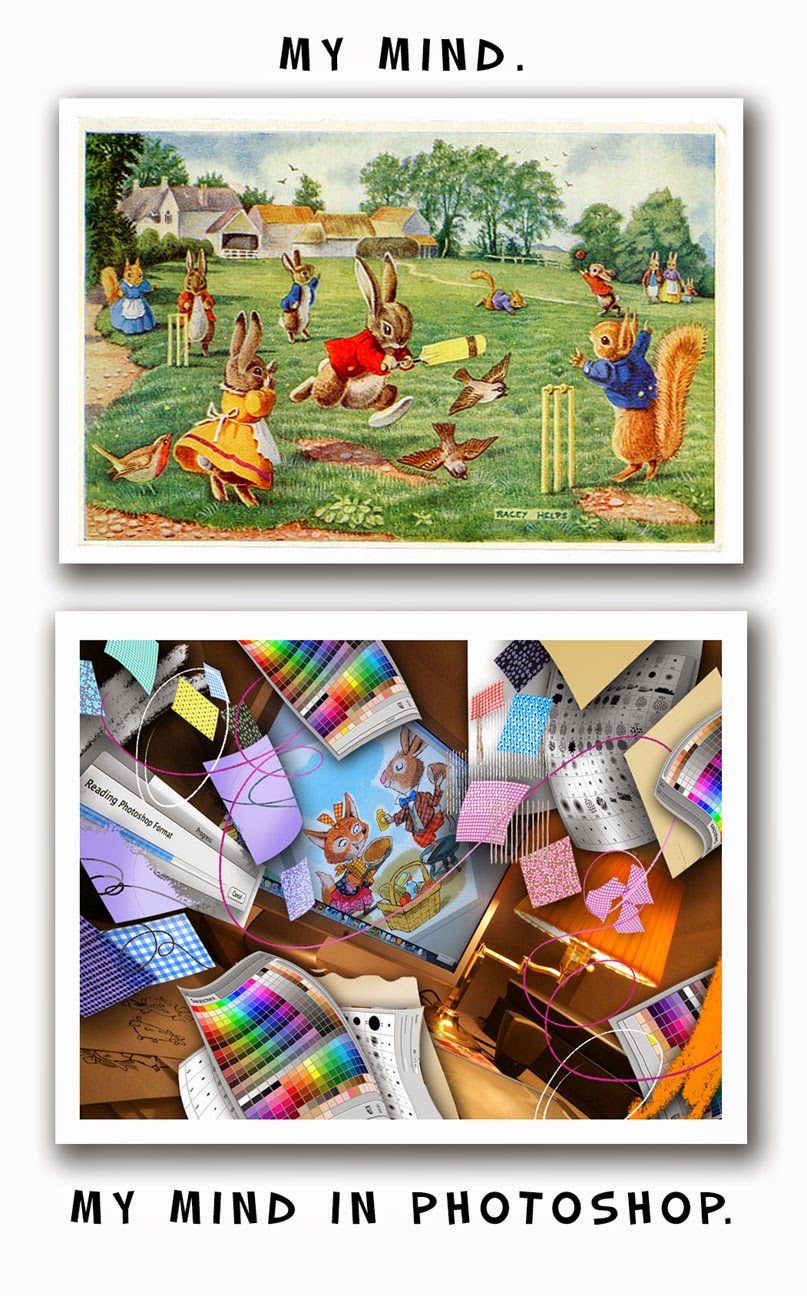 Once again it's time for Bunny & Fox 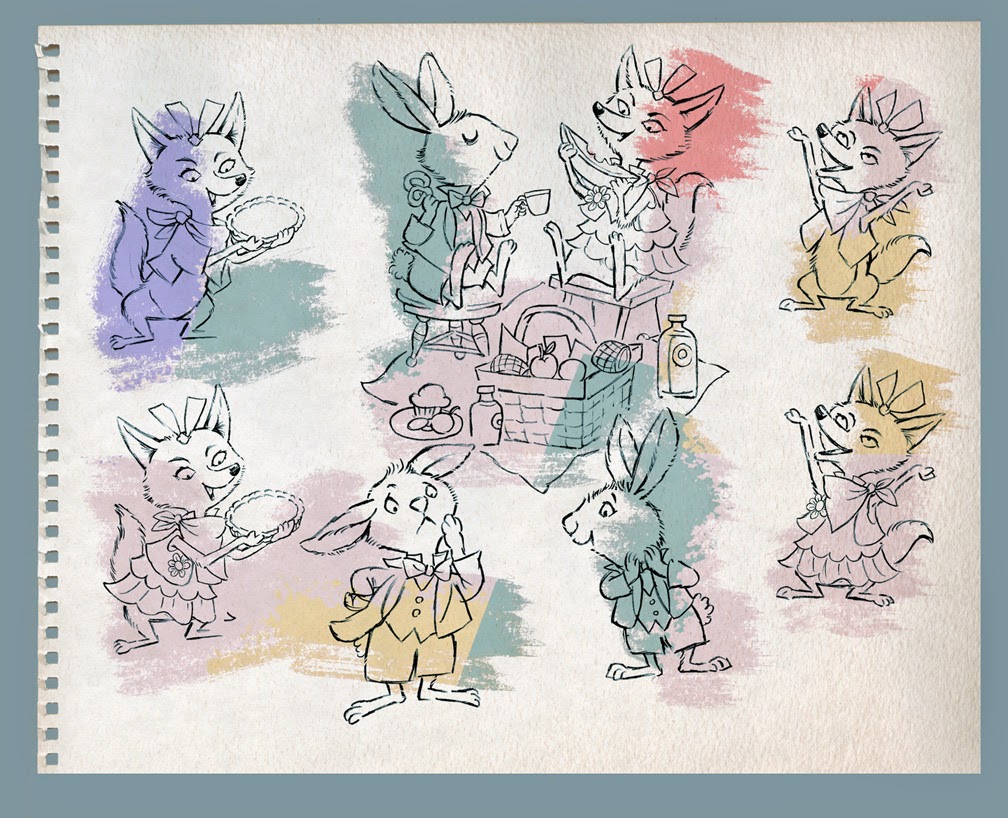 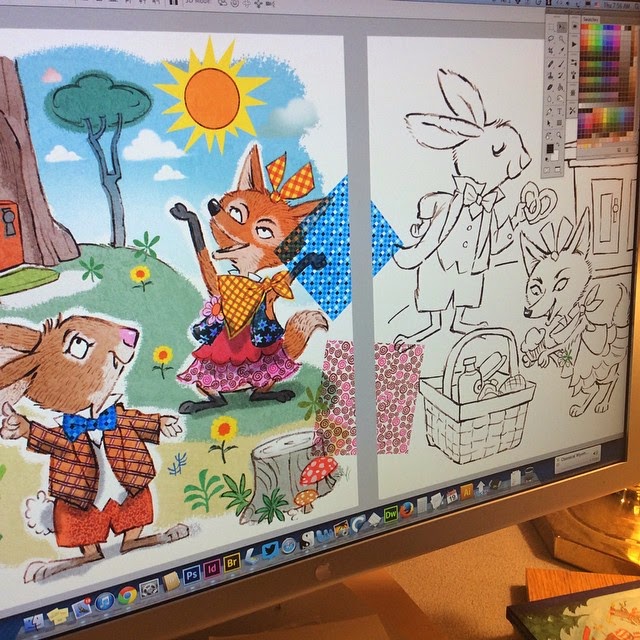 So much fun dressing Monsieur Bunny et Mademoiselle Fox. I design the patterns and natty textures of the home-made plaids. 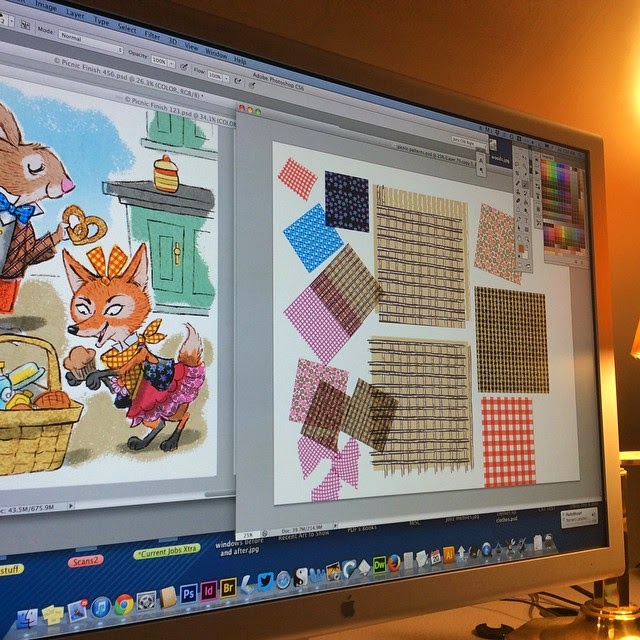 And then there's my Hollywood movie poster photo, naturally. Please understand that I've never set foot in Hollywood. But maybe because of that I always think that adding 'Hollywood' to anything is bound to add panache... as in:

People probably thought I was bluffing when I said I'd been on a 'Hollywood photo shoot' one rainy night last December. But I really was - in the dark - on my bicycle - with my camera and tripod.

The documentary film project required a dark, gothic, edgy image. So I was out to make just such an image with my trusty Lumix.

In the falling dark the rain had just stopped. It was time for my Hollywood moment. Fate had compelled me... my date with Hollywood.

It all happened when the stars aligned and by a happy twist of fate I was contacted by the art director in L.A., the amazing Dagmar Wilde, who has created dozens of award winning Hollywood movie posters.  (I know it doesn't sound like I fit into this world, does it?  Believe me, I don't. So I was just as astonished. But it was so much fun).

Dagmar has designed movie posters for DeNiro, Ben Stiller, Robert Altman, Mad Men, Gossip Girl along with a stunning collection of independent film projects. And she's also a playwright and writer - all leading to the 'amazing' moniker. And for full disclosure, I am honored to say that she's a friend of mine from online and life.

The film is 'The Hunting Ground' directed by Oscar nominated Kirby Dick and Amy Ziering.  They've done films like The Invisible War, Outrage, This Film Is Not Yet Rated and Twist of Fate. This film is a documentary on the topic of college rape.  Not a topic I knew anything about... but I guess that's the whole point of the film - to shed some light on this overlooked issue.

Since it was temporarily not raining, I shot a sequence of images, trying with intuition to make something compelling. Of course a tripod and correct exposure are requirements for night photography. It's way trickier than daylight shooting... factors like noise and blur and losing details all figure in. It can be difficult. I used a timed shutter release rather than manual, so as not to blur the image. And the mighty Lumix fz200 did it's job.

I finished snapping and biked home in the dark. Was that really all there is to a Hollywood photo shoot? I suppose so. And in short order Dagmar did the rest with her design magic, turning my photo into a real Hollywood poster. Figures were added, figures erased, branches removed, banners hung... all kinds of changes. Employing her design wizardry, Dag transformed the original to something quite different.

The final poster artfully captures a sense of edgy, dark, spooky gothic college setting, exactly filling the parameters of the poster project. So now this film is on it's way to festivals and venues everywhere... how exciting!

I was clicking around on the Sundance site and was delighted to see another photo of mine.... rubbing shoulders with the Stars. Such a thrill! Well that was my Hollywood moment. Sigh...

I wonder if I will ever really make it to Hollywood? Of course there was no cast party except in my imagination. Oh well, illustrators never get parties either.
Posted by John Nez at 5:30 AM 6 comments:

Bunnies are my stock in trade. 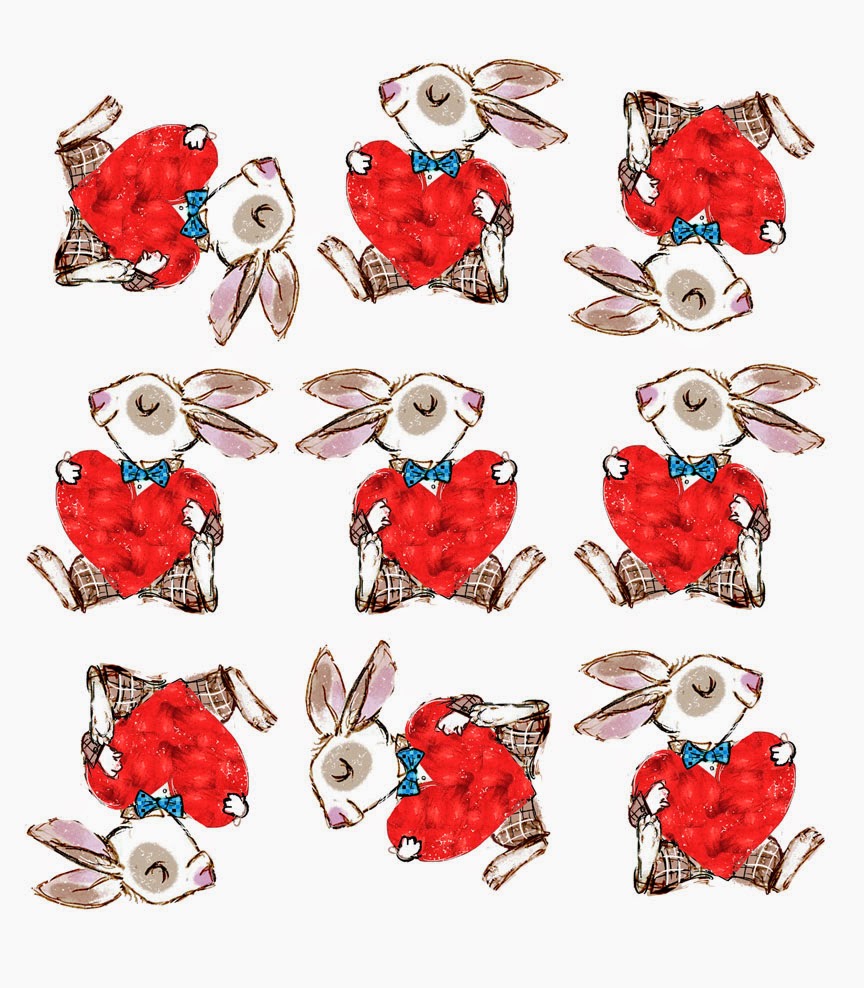 Ever since I first drew this rabbit, years ago, I've been smitten.  Now I get to turn it into a fun bunny project... so it was worth the wait. 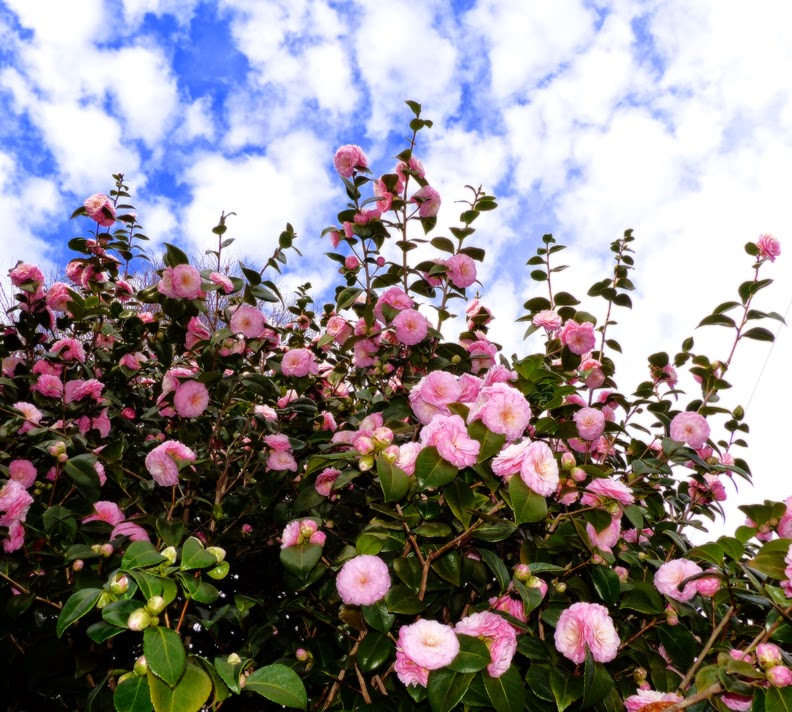 How delightful that Spring just explodes everywhere at once. 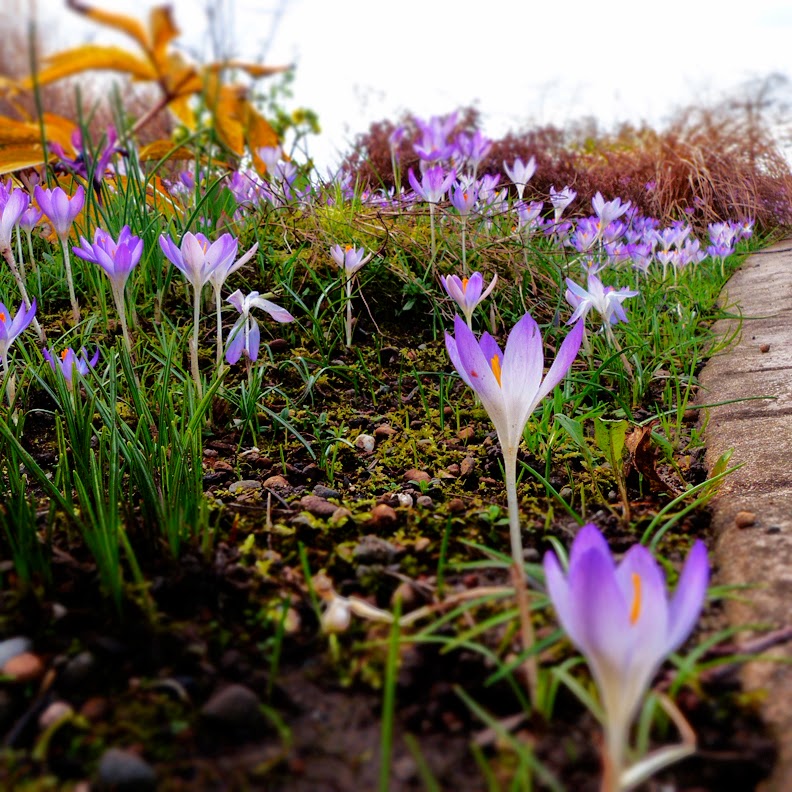 So hang in there you snowbound New Englanders.  Believe me, you'll be wearing shorts and cooking barbecues long before we will here in Seattle. 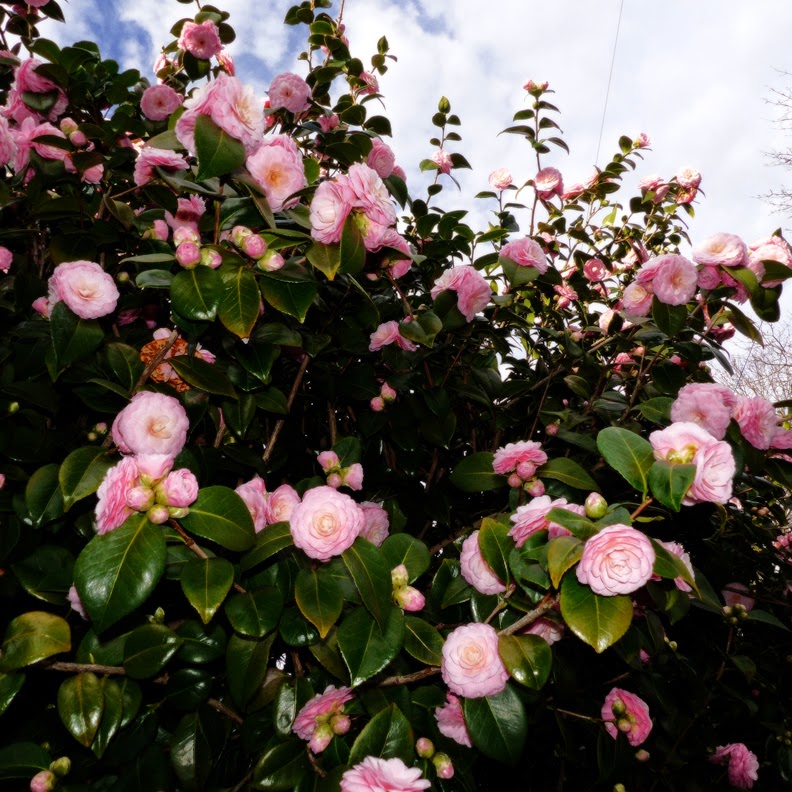 Chances are it'll still be chilly and cold in June, most likely.
Posted by John Nez at 7:11 AM No comments: 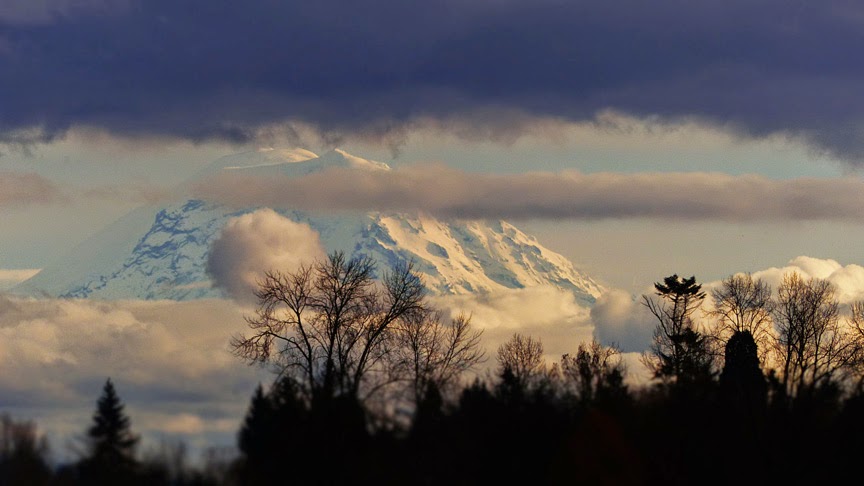 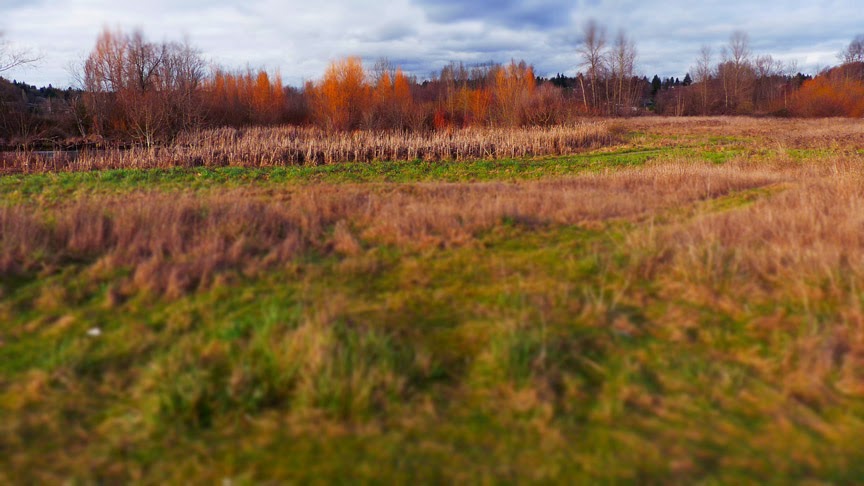 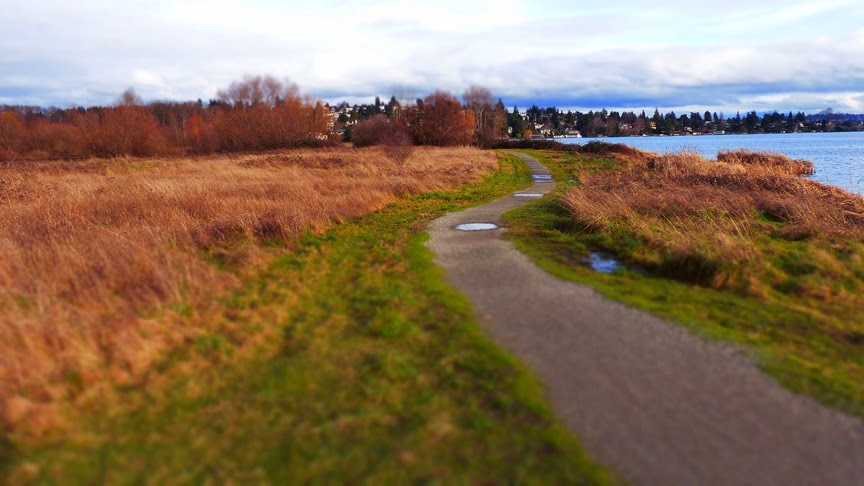 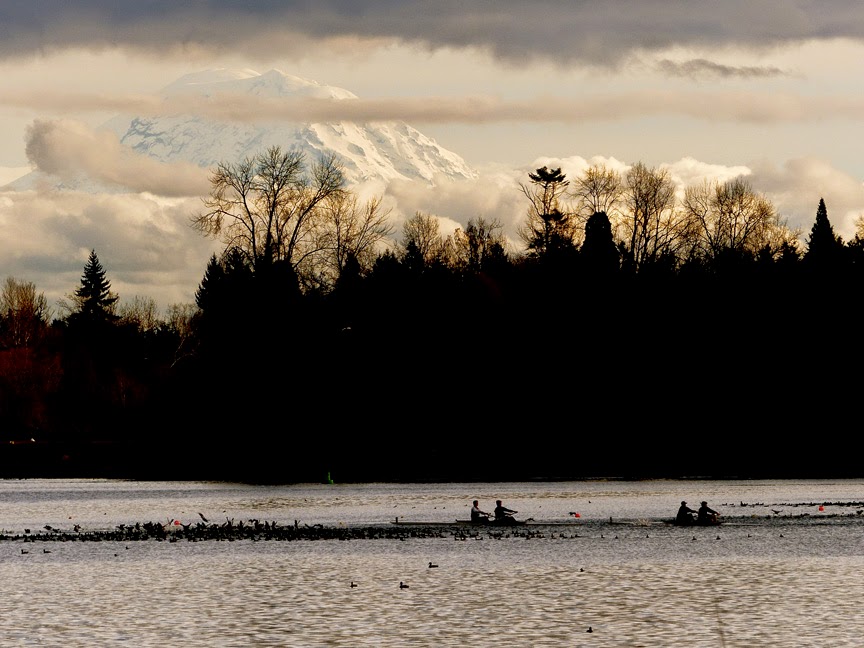 A little sun-break allowed the trusty Lumix a chance to capture a few photos. Mt. Rainier was in a cooperative mood - the skies were dramatic.  There have even been reports of otters nearby -  which is very rare.

Dressing the Line - step by step

And finally it's time for our happy little line to get dressed. What? Dressing the line? How can that be - is it undressed?  Heavens!

Yes, the raw line right out of the scanner is woefully under-dressed. It's just a plain Jane... it needs that little extra bit of pizzaz.  So once again, it's Mr. Potatoshop to the rescue.

With a few artful clicks of the keyboard the line is enhanced first of all with brightness - contrast. There, it's looking a better already. Next we do a little quick touchup on the actual lines themselves - with a matching textured photoshop black pencil. Finally, our line is ready to go out and meet it's book page!

But first, let's add a touch of color - a little blush! And then, naturally once it's all dressed up we add the color and texture and all the other nice things to make it a real finished line, and proudly part of the artful page.

If you scroll through the images you can see all these steps in like magic. 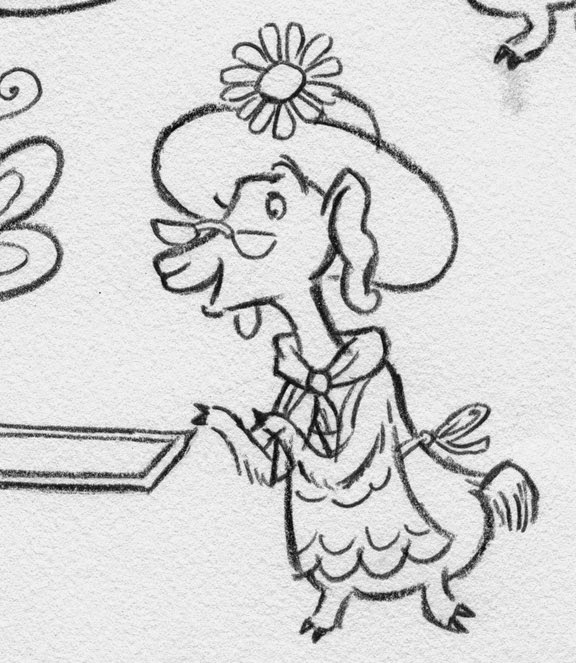 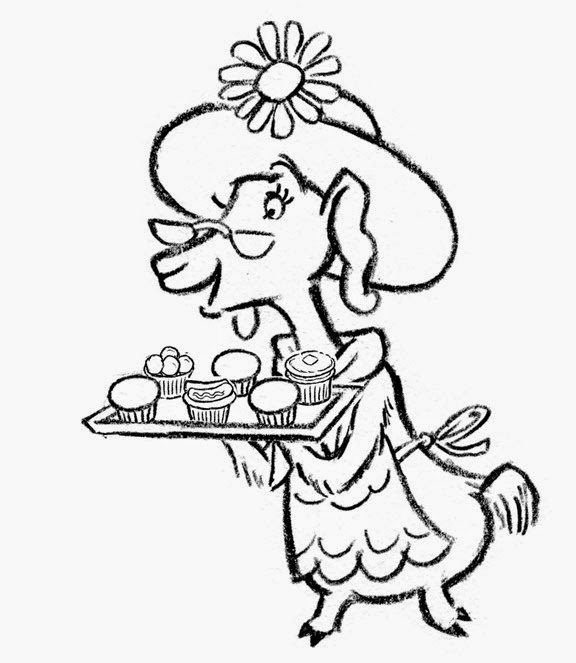 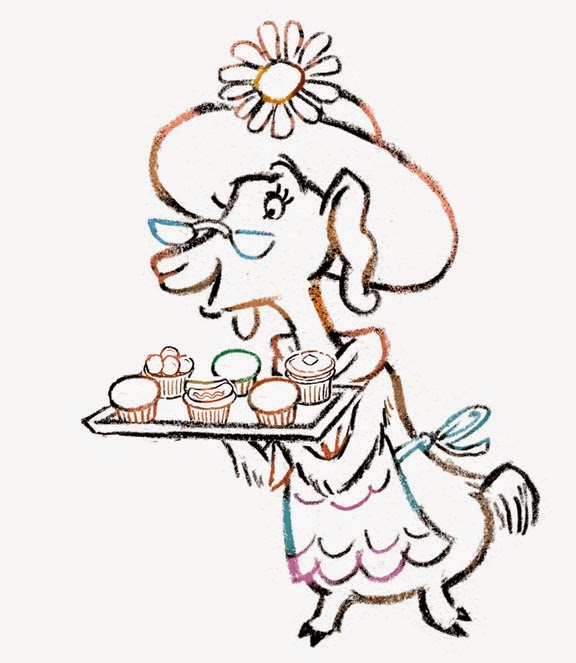 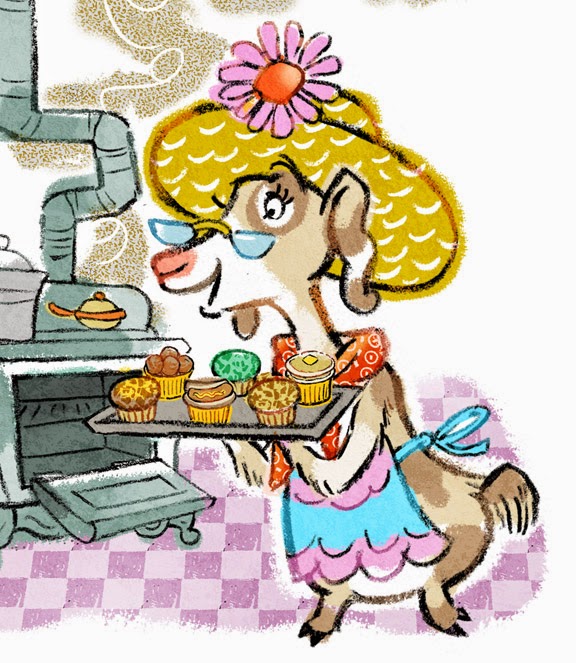 Is there a relationship between Art and Pastry? 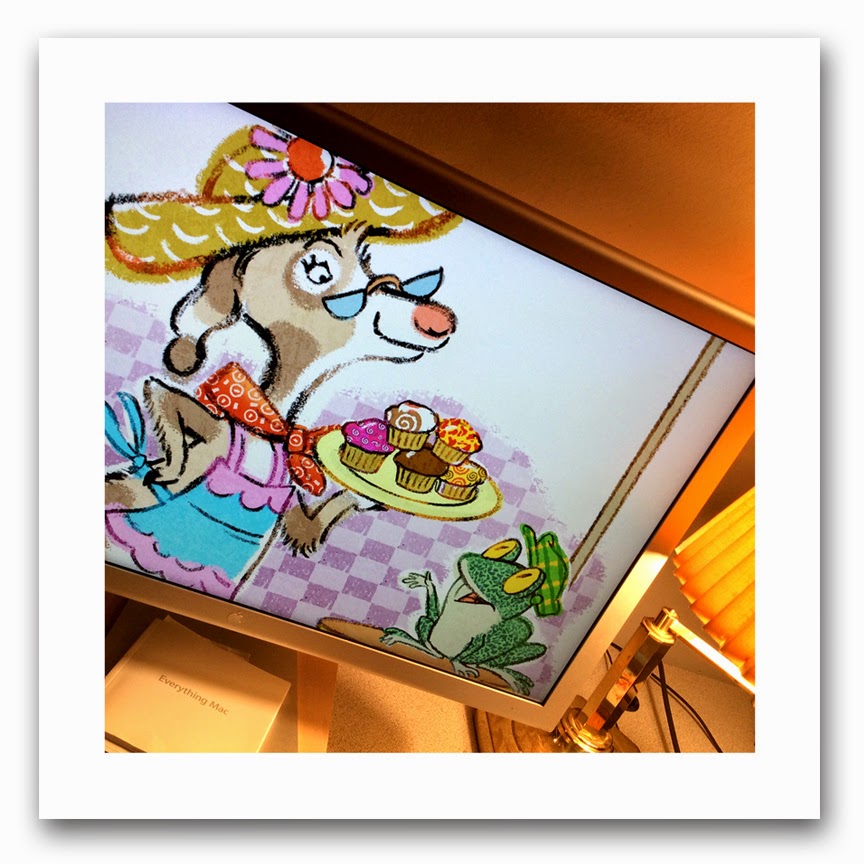 The question that great minds are contemplating today is a simple: Is there a relationship between Art and Pastry?  I lean towards the affirmative - Yes, a clear cut relation of crumbly line quality to crumbly baked goods such as strudel or coffee cake is undeniable.

I KNOW there's a relationship between reading and eating. Witness my rapt fascination with whatever text is on the back of my Cheerios box in the morning. It's different from ordinary reading... more nourishing to the soul somehow.  It sinks in deeper...
Posted by John Nez at 7:37 AM No comments: