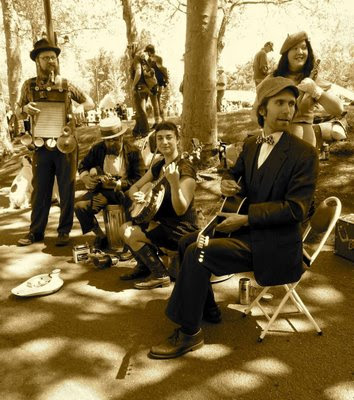 It is days like this when living in the petite-bourgeoisie paradise of Seattle can seem a wonder. It was one of those days when the best intentions of common people have triumphed.

Marvel upon marvel unfolded for the photographer's keen eye... all strummed to the tunes of some down home banjo picking.  It was the chaotic, free-for-all that is the Seattle Folklife Festival, held every Memorial Day. 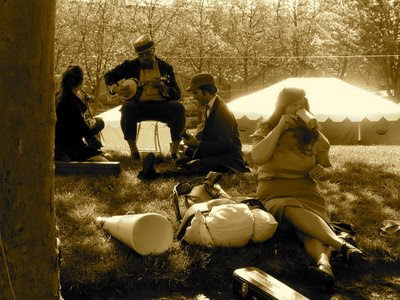 Picturesque jug bands in abundance lighten the spirits. I think this is one of the better photos I've ever taken... all done by sheer coincidence, of course.

A sprinkling of mimes adds a touch of odd spirit... these two women would stand motionless for a minute at a time. 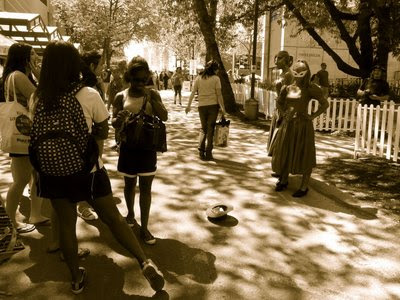 Another band had quite the assorted lineup... with gramps on bass, 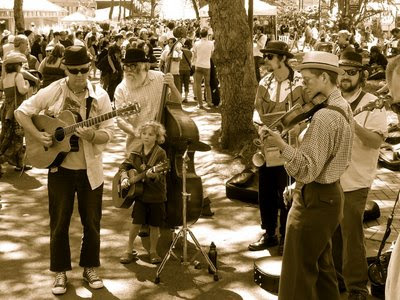 and the kid almost stealing the show. 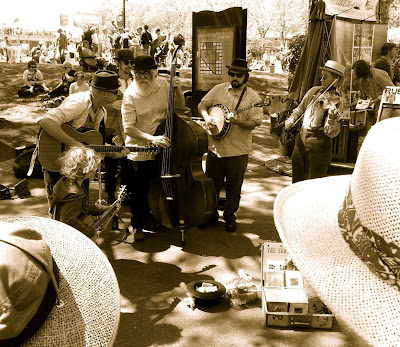 I have a notable weakness for the well played mandolin and keen harmonies of bluegrass gospel music. 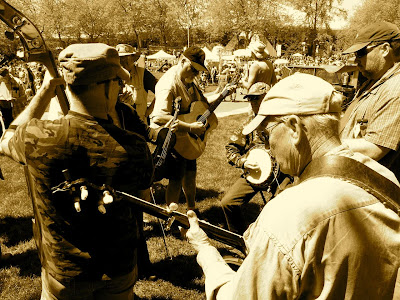 If the music is sad enough to bring out a brimming tear, that means it's been played right. Thank you, Seattle Folklife Festival.

I guess publishing children's books really isn't all that different from busking with a cap in hand when you get right down to it.
Posted by John Nez at 3:16 PM 1 comment: 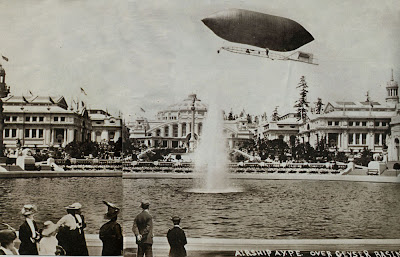 I found it ironic, amusing and fascinating to come across this 100 year old photograph taken in Seattle at the Alaskan Yukon Pacific Exposition of 1909.

Here in Seattle there's a bit of historical interest in marking the 100 year anniversary of this event.

But on a more personal note, I found it amazing that this photo was taken at the exact same location of my favorite bike ride. In fact the photographer has selected the location where I usually sit halfway through my ride... admiring the very same fountain which has spouted peacefully for a century now.

The rest of the fairgrounds from 1909 have been changed into the University of Washington campus. But the fountain remains intact from 1909... along with the spouting jet of water of the fountain. How odd that my book should have so many similarities in time. It's easy to imagine the Sky-Cycle drifting overhead... 100 years back in time. Of course imagining is one thing that children's book makers are good for.

The monumental patience of book-making

And finally the painting is complete!

It's an interesting process that any book goes through. Of course it's only really complete when it becomes a real book... printed up and waiting to be part of the entire story.

Here's a photo of the finished book, Cromwell Dixon's Sky-Cycle. I'm looking forward to that UPS box arriving on my porch in the near future when the books finally arrive. I was very encouraged to see a nice blog posting about my book on the Kids Lit Blog. What fun, having the world at large finally see what I've been working away on for such a long time. 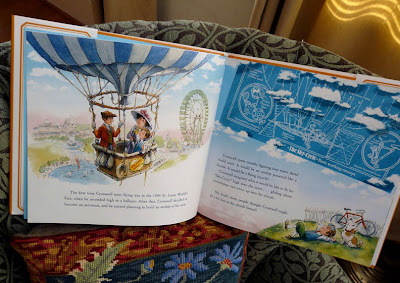 The patience required to get a book written, submitted, edited, illustrated, proofed, printed, reviewed and finally sold in bookstores is monumental. Whew! It's a good thing we can work on more than one project at a time.
Posted by John Nez at 8:38 AM 2 comments:

Logically, the next step in the production of the illustration is the painting.

Real paints on real paper. Although this is undoubtedly my favorite medium, it is no longer the only choice. Digital variations can be interesting, and at times they can lifesavers. That is if one values the hours spent in making changes and repainting the same scenes.

When I started painting the first spread I decided to try out using a hybrid technique using both real and digital painting. I painted it first with acrylics on watercolor paper, then scanned it and processed the image with Photoshop. It was evident, as soon as I began adding in new layers with texture and shadows that it would work out just as I had hoped. I have to say I'm completely delighted with how it all printed up. The additional digital details are fab... but really only apparent in the finished book.

This film shows the original finished painting and related color studies done in Photoshop. Picking the color tones and the values ahead of time can save having to do things over. So a quick study brushed in with Photoshop can be time well spent.

I did up a little step by step on some of my many digital techniques on the Cromwell Dixon's Sky-Cycle book web site. Just click the tab 'Making the Book' if you're interested in knowing more.
Posted by John Nez at 7:45 AM No comments:

As part of the launch of my new book, I thought I'd run some of the sketch videos I made up way back when I was first starting the sketches.

This collection of very rough sketches is a collection of scraps of drawings that give an idea of how I assemble the sources to arrive at the final sketch.

I never just sit down and begin a drawing from start to finish like the French painter Ingres used to do! I once saw a painting by Ingres in the Metropolitan Museum of Art in NYC, where he showed his technique of going directly from the pencil sketch to the finish painting all in one piece! But I digress...

In my case it was interesting to try to find the right 'voice' for the drawings for this book. Being a non-fiction book, I still wanted it to retain as much personality as I could. But trying to match the period genre of illustration styles was the challenge.

The movie was done with my digital camera... all in one take. I just turned up the loudspeaker in my studio to record the soundtrack. All very high tech! The music is vintage jazz from the 1920's... one of my favorite kinds of music. It's full of charm and style.

I'll be the guest blogger on the Putnam's web site in a few days... so that ought to make for a bit of virtual excitement.

My new book's web site is here: Cromwell Dixon's Sky-Cycle in case anyone is looking for it...
Posted by John Nez at 8:07 AM 1 comment: 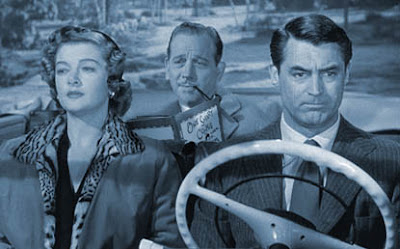 One hears about movie stars who don't like to watch their own movies. People seem surprised at that, but I don't.

Movie stars might have quibbles with how their profiles looked... or how their scenes by the swimming pool came out. I saw in an interview with a legendary British actor who couldn't bear to watch his older movies. He claimed it was too painful to watch how he was overacting.

Well it's just the same with children's book makers. If you want artistic quibbles, we have quibbles in abundance!

I find it's easy to relate as a children's book-maker. Such behavior is almost a no-brainer. We're always struggling against that inner critic, who is not known to be any artist's best friend.

But it is nice when finally, with the forgiveness of time we learn to be more self accepting.

I once did the covers of a magazine for a year... and every time I'd get them in the mail, I'd shove them into an envelope and out of my sight. I didn't want to look at them ever again. Years went by and one day I discovered a big fat envelope on a dusty shelf. I opened it up with curiosity. It was the entire year's collection of those old magazine covers. 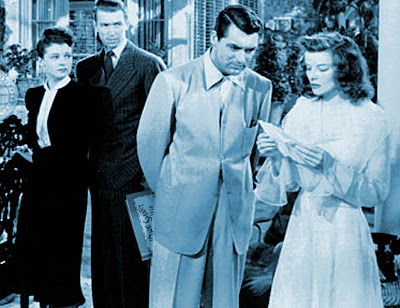 But this time, instead of cringing, I was astonished to see how well designed they were! How cheerful and fun they all looked! Finally, after 5 years, I was able to give myself a pat on the back. Such is the artiste's life I'm afraid.

I have an equally hard time with writing. Since writing is a totally plastic art form, it's difficult for me to ever decide when anything is actually 'right' or not. Sometimes I make a guess if it's 'right' or not... but then it's so easy to change everything.

I find it's especially difficult to read the printed final version of a book I've written. Why? Because no matter how many times I've proof-read it... or read through it until it turns invisible... I can never get over the feeling that I've left in some critical error. I'm afraid to read the lines. I keep thinking I might have put in the wrong word. Maybe I used 'for' instead of a 'from'. Little things like that won't let the poor author relax.

So I know just why those movie stars don't want to watch their old movies.

Today's blog photos are of notable people looking through my book, 'One Smart Cookie'. No doubt the stars were gracious enough to overlook the errors...
Posted by John Nez at 12:30 PM No comments: