I did my post doctorate work at Charm School 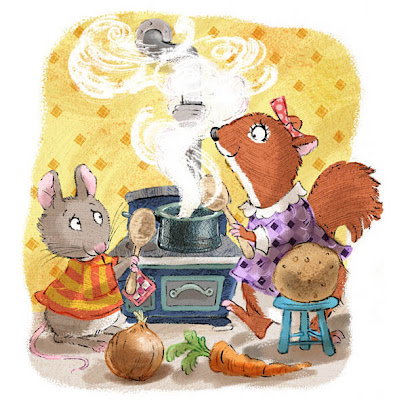 My qualifications as a freelance design professional? I matriculated in 'Tail Sciences' with a minor in 'Furr-ology'. This providential career vision has helped me reap many financial rewards and a deeper understanding of the furry world around us. I am adept at rendering tails of every sort... be they mousey, squirrley, doggy, rabbity feline, fowls or fins.

Oh... and I also did my post doctorate work at Charm School. I suspect that's where most of my street smarts came from.
Posted by John Nez at 9:49 AM No comments: 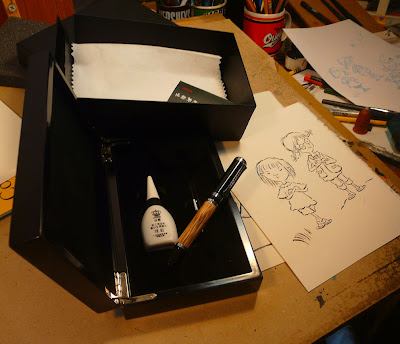 A large package arrived on my doorstep... it would have made a nice doorstop it was so heavy.  WHAT might that be? I wondered... I wasn't expecting anything.

Actually I was expecting a pen - but this couldn't be a pen - it weighed 3 pounds!

Opening the box I first discovered another big black box inside.  Mysterious I thought.  Then I opened that box and there was another black box... a lacquered shining black box with polished chrome hinges.  Finally opening the lid of that box I discovered the Confusicous Pen I had ordered!  (it only took 2 days to be delivered from Amazon - I thought it'd take 3 weeks).

Lifting the pen, I found the heaviest pen I've ever held. It feels like it's made out of iron.  But the reason I bought this pen is for the nib, which has a special flattened end for making wide calligraphic drawings.  It was recommended to me by Jackie Urbanovic, an artist friend of mine. 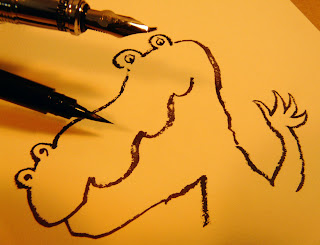 So I loaded it up and tried it out... works great!  It does provide amazing line variations and awesome mottled texture when applied on watercolor paper.  That's what I was after.  I'll be using this in combination with my Pentel brush-pen, which also makes delicious crumbly expressive lines.
Posted by John Nez at 7:56 AM 5 comments: