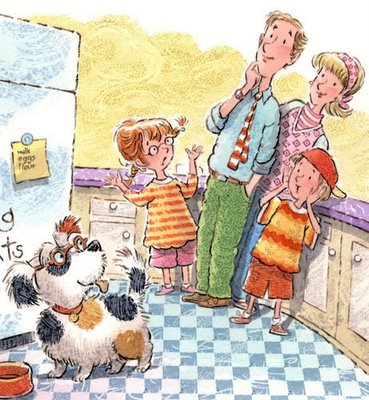 What I wonder is how do dust kitties manage to assemble themselves out of primordial chaos?

I mean it does seem like lots of work and forward planning for thousands of far-flung dust particles to decide upon a mutual gathering place and decide altogether to join up and form a dust kitty. Wonders will never cease I guess... certainly not around the old studio, where there's dust kitties a-plenty and more gathering steam all the time.

I suppose ideas are a bit like dust kitties... forming out of the primordial nothingness.

I usually have my best writing ideas around about 3 am... which then require that I get out of bed and jot them down, or else keep thinking about them until daylight. Either way, it always makes for the artist stumbling around the kitchen in a groggy daze... scribbling down those whisperings of the muse that just won't leave a body in peace.

Anyhow... these are a few fun drawings from a new book of mine.... 'One Smart Cookie'. They're done using an interesting technique of real and digital mediums. 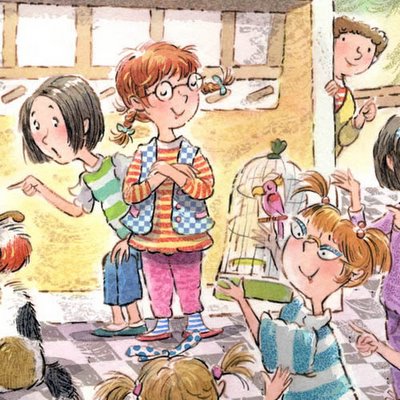 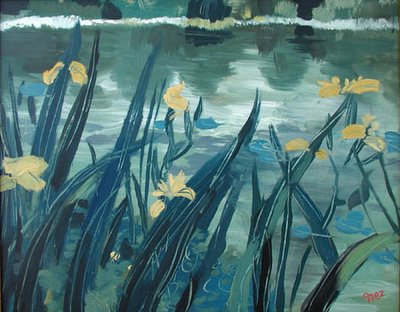 Artistic self esteem. Now there's a tricky subject. Basically, most artists I know are never 100% happy with their art. This brooding discontent can easily turn into an artistic complex... or even worse. I know first hand that even famous artists are almost never fully happy with the work they've done, especially older work.

Sometimes it might seem to other people that artists are totally self absorbed... that we're only focused on Me!, Me!, Me!. But in fact we're all we've got. It's like that Picasso quote... "When it comes down to it, all you have is yourself. The rest is nothing."

We're not part of any team. No one else can guide our brush or ideas much... no one else can get in-between us and our art. We're totally responsible for it's outcome and when it's done we have only ourselves to thank or blame.

I think that's why artists can sometimes seem self absorbed... and obsessed about their work.

And of course discontent is always the first step towards change and improvement. So if an artist isn't happy, that's just par for the course. I think non artists imagine that the creative process is some kind of wonderful walk down a marble staircase with perfect happiness achieved at the end. It can be fun... but often in fact the reality is the opposite. It's often more like mud-wrestling an alligator and winding up missing a few digits.

The painting above is one of my paintings on canvas.
That's what I do on that rare Sunday when I'm not totally tired of making illustrations... a Busman's Holiday for sure.
I'd like to someday actually paint and sell canvases, since it's so much the opposite of illustration.

It's BIG, it's done without deadlines, there are no 'art specs' to fulfill, there's no narrative usually, it can be seen from across the room and it's not just a tiny illustration that fits into a book sized page.

It's actually kind of a therapy... kind of like how riding a bike is a perfect cure for too much driving in traffic.
Posted by John Nez at 11:20 AM 7 comments: 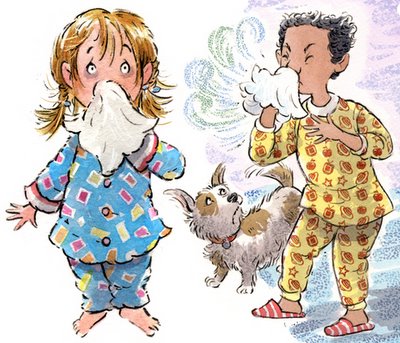 Definition: A malady peculiar to the creative arts where the practitioner becomes so enamoured and wrapt up in their creations and studio that the world outside becomes more distant and less appealing by degrees. Worst case scenarios might involve living in the studio for all practical purposes, working excessive hours and a in many cases a pronounced fear of venturing outside the studio into the real world.

Okay... let me be the first to admit... I got it. Anyone else? Time to fess up... I know you're out there and not watching olympic ice curling, though that too has it's fascination.

I recently watched the DVD 'My Architect' about the famed architect Louis Kahn. Apparently studio-itis is a frequent malady of architects too. Louis Kahn had a really bad case. Missing holidays, reluctant to ever go home, calling his associates up at 3am, even having children with numerous unwed female studio mates.
Eventually he even scratched his address off his passport... no one knows why. But my guess would be that his only address was his office.

Studio-itis.... got to be careful you don't catch it. But wait... what the heck else is there to do all day long when you don't have a real office to go to? I say studio-itis is a good thing.

I understand Norman Rockwell even worked on Christmas day.
Posted by John Nez at 3:15 PM 8 comments: 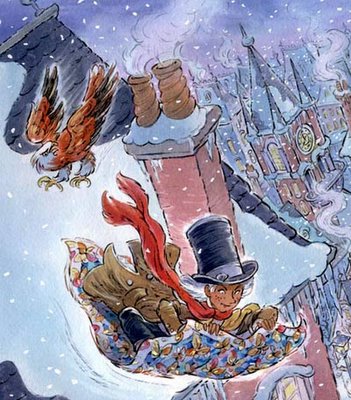 My favorite part of making a book is doing the rough sketches. It's like being a moviemaker... only we lucky artists get to do everything ourselves.

We're the movie director, writer, art director, costumer, casting director, scene builder, lighting technician, sound engineer... all in one.
We design the scenes, set the lighting, decide if it's a closeup or landscape shot. We get to tweak the costumes and haircuts... we choose every detail down to the upholstery on the furniture... we add in the extras (avoiding crowd scenes if possible). We get to do the entire movie!

Recently I happened upon a real movie crew shooting a scene outdoors at the University of Washington campus. I sat and watched them for an hour... it really looked tedious. They had about 25 extras who were the 'crowd' who simply stood in their marked places on the sidewalk for the duration... and when directed would walk about 15 paces. Then they'd return to their marked spots and stand another 15 minutes.

The equipment looked incredibly expensive. Two giant trucks parked 100 yards away with cables, generators... gigantic lights... two tents to keep the rain off all the editing equipment... a humongous ride-on camera... giant 8 foot lights (even though it was outdoors)... filters for the lights... a crew of at least 15 techies... walkie-talkies... a nearby lunchroom RV so the whole crew could break for lunch. I'd guess, just that one afternoon's shooting must have cost at least $20,000. And from all I could tell they only shot about 2 minutes of film total. Cold, boring and tedious. That's how it looked to me.

Makes sitting at my desk seem like the most luxurious creative freedom imaginable in comparison... where all alone I can create the whole production by myself. Makes spending 5 months on a single book seem like a flash in the pan.

Of course it's just the publishers who make the final production a reality.
They're the Producers who have the god-like power to axe our dreams or make them come true.

The bookcover above was done for the US version of 'Otto & the Birdcharmers', originally published in the U.K. It's a remarkable novel set in a kind of Harry Pottery type of world. It was a joy to read... and I have to say I liked it more than most Harry Potter books, since it was darker and more Kafkaesque. Amazing imaginative scenes throughout... sorry I couldn't have done some interior art too. In fact the hardest part was choosing which scene to do for the cover. I'd fold down the page whenever I got to a really good scene... and by the time I'd finished the book, about half the pages were folded down.
Posted by John Nez at 9:44 AM 4 comments:

Which is harder... writing or illustrating? 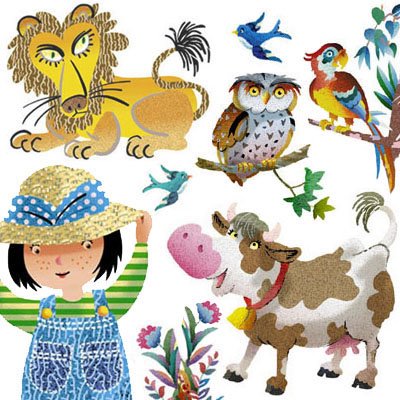 So which is harder... writing or illustrating?

No question about it, for me at least, Illustrating is 25 times more difficult than writing.

For me writing is more mysterious. It's a matter of waiting for the planets to align... being on the outlook for insights that reaveal the constellation of a story from start to finish. It's mysterious and impossible to define.

Imagine if writing was as difficult as illustration.
Imagine if every sentence had a color that needed to match the paragraph... that each word in each sentence required the exact placement of pen on paper... the exacting curve of a brushstroke.

Imagine if every letter had to be sublimely crafted so that no one letter would stand out to obscure the design of the sentence.
Imagine if every time you used the same word you had to recreate it from a blank page.

Imagine if after writing an entire page of 350 words, you screwed up on a sentence and had to entirely blank out the entire page and begin again from the start.

Writing requires a special set of skills and insights into life and stories. But Illustration can drive you NUTS!
Posted by John Nez at 3:26 PM 7 comments: