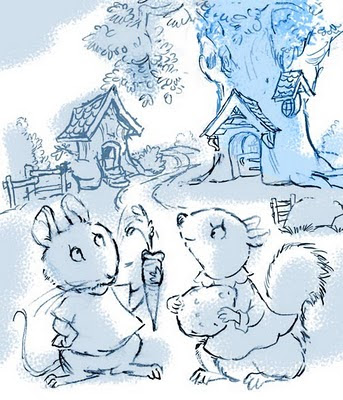 Celebrating: A moment in History... the signing of the health reform bill for almost all citizens of the USA! Finally, like every other 1st world nation on the planet, Americans will now know what it's like to live without the fear of financial ruin hanging over their heads. President Obama finally worked the miracle that has eluded every other President for a century.

This will be a huge break for freelancers, who always get the short end of the insurance stick and currently get raked over the coals by insurance companies. I know many illustrators who have to pay $1200 a month just for disaster coverage... and they still pay the first $2000 out of pocket!

Watching: Some lovely movies.... 'The Cave of the Yellow Dog' directed by a young Mongolian woman filmaker from Germany.
Actually she's Mongolian... but grew up in Germany. It's filmed in the wilds of the Mongolian plateau... breathtaking. This movie is so wonderful. Her other movie, 'The Story of the Weeping Camel' was equally magical and wonderful.

Also watching: 'Little Dorrit'... the 4 disk DVD epic. That Dickens was such a genius... who else can create characters like that? The production is amazing.

Reading: A book about Walt Disney. It is fascinating to see the financial wheeling & dealings he had to risk to just stay in business. I think he was really more of a producer, dreamer and director, rather than an artist. I know I would never have the stomach for the risks he had to take to succeed.

Listening: A classic bluegrass tune... 'Sally Gooding'
Posted by John Nez at 11:59 AM No comments: 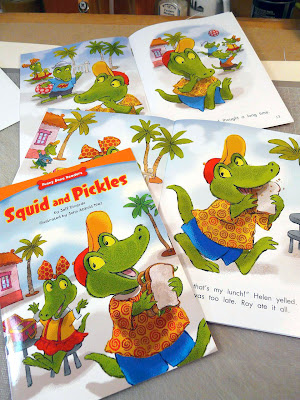 I was delighted to open the mail the other day to find samples of a new book. I think any bookmaker must always find a secret thrill in opening the final printed book and turning the pages.

In this case it was relishing the pages... since most of the characters were pickle green. Coming up with a gator character was a challenge... and I'm pleased with the outcome. I suppose having never been to anywhere that alligators actually live it seemed all very exotic. 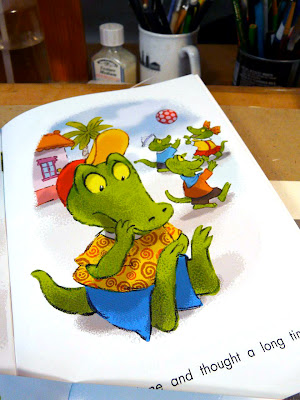 It was fun to draw and color. l tried some new things with photoshop. The story, by Jeff Dinardo, is very well crafted... achieving that most difficult objective of storytelling - to create the arc with spare simplicity but still entertain and carry a purpose.
Posted by John Nez at 9:01 AM 4 comments: 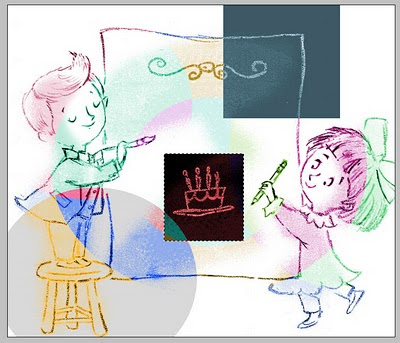 I've been puttering away on a delightful new book idea after coming down with a fairly bad case of 'dummy fever'.

Dummy fever is where one can't simply cannot stop fiddling away at drawing, scanning, writing and playing around in Photoshop and Indesign. 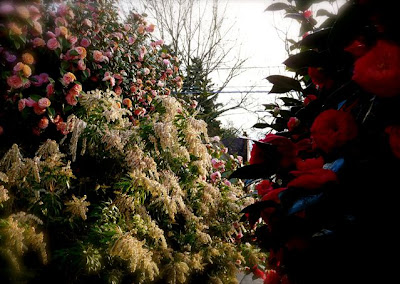 listening: to the plaintive song of the returning robins. To hear their song on a dark winter's morning truly seems miraculous and unexpected.

waiting: The eternal wait for 2 different publishers to get back to me... so it goes.

dreaming: About getting a Mac Pro and CS 5 (due out in April). I think that'd cost just about exactly as much as a 5 day trip to NYC. Actually the trip would probably cost more.

excited: I got a very exciting email the other day from a well known PBS TV show. They were curious about my last book and are thinking they'd like to possibly use some graphic bits on one of their new programs. Of course I'd be thrilled - it would be priceless publicity.

But it's not certain if it actually will make it past the cutting room floor as they say in Hollywood. In any event, such exciting things rarely happen around the dusty old studio.
Posted by John Nez at 9:05 AM 1 comment: