Icons of the Northwest 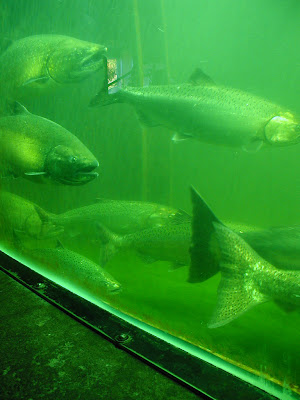 Salmon (why do fish seem to use the singular and plural noun for both?) 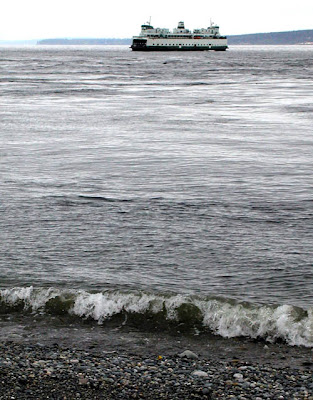 Picassos From the Start 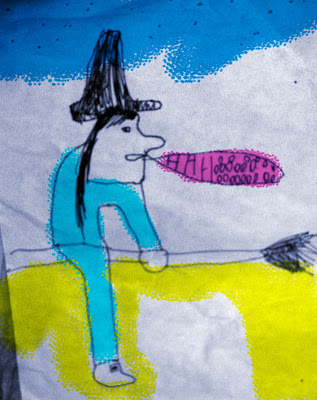 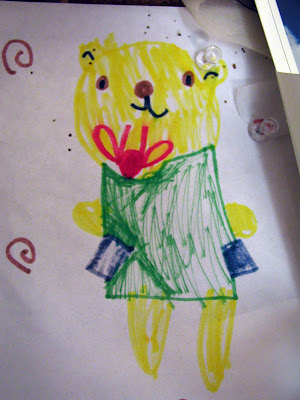 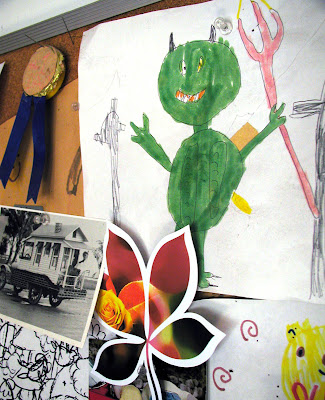 Picasso once said it took him 45 years to draw like a child.

I quite agree. That sort of spontaneity is the hardest thing to accomplish in drawing.

I rescued the drawing of the witch from the alleyway, where it had fallen into the rain. Now it will live on, recaptured for all the good that art can do. I've saved all my children's masterpieces.

I suppose I treasure them most... both as a parent and as an artist.

Now... it's on to the miscellaneous drawers! The true record of life's travails... all left over in bits & pieces.
Posted by John Nez at 7:27 PM 2 comments:

Now What Do I Do? 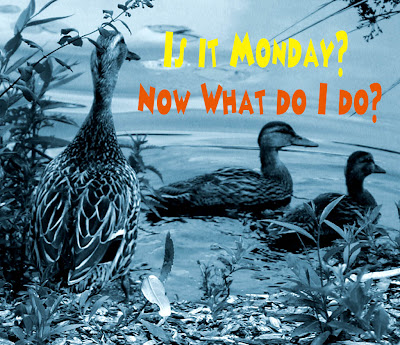 Usually I just feel sort of 'out of it' by Monday.... but somehow this Monday seemed more like a disconnected juncture from the 4th dimension. '

One of those days when no two ducks can ever be lined up in a line. WHAT is a freelancer to do?

Productivity must be the point of all the busy weekdays, where the workaholic fools themselves into leading a meaningful, bill-paying existence through busy-ness, focus and accomplishment. 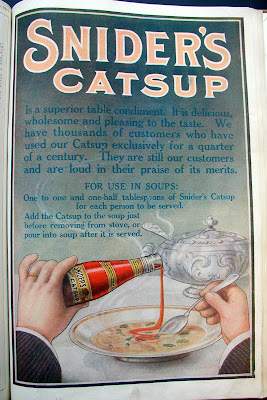 Brain... I am delighted to report... is decidedly empty.

I wonder who decided on the correct spelling of ketchup?
Posted by John Nez at 3:50 PM 3 comments: 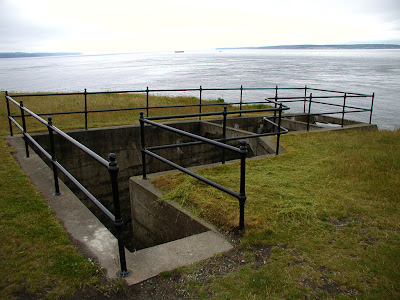 A strange stairway was carved into the cliffside.
Mad echoes of laughter. Could they be seagulls? 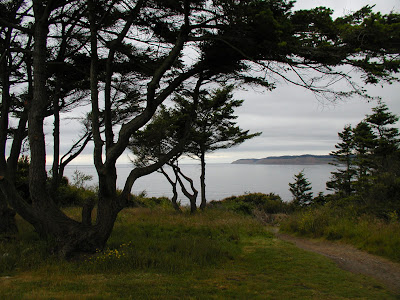 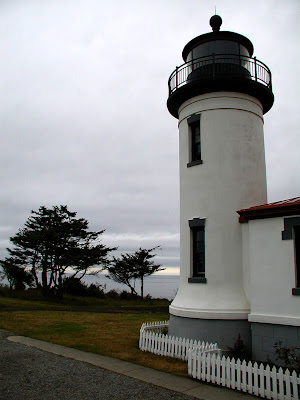 The tower at last! 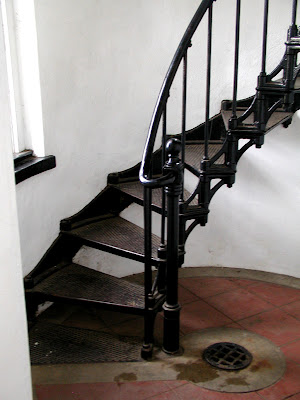 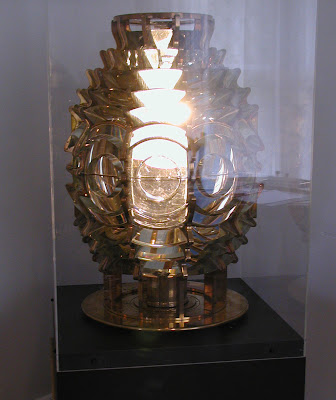 The glittering jewel revealed. The beacon of enlightenment...
Posted by John Nez at 8:39 AM 4 comments:

A mysterious tale of the Sea 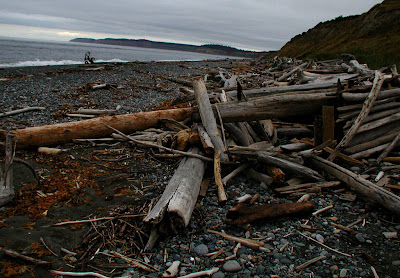 Castaway in the sea wrack... 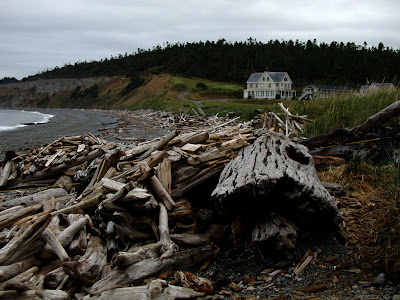 A mysterious house appeared in the distance... 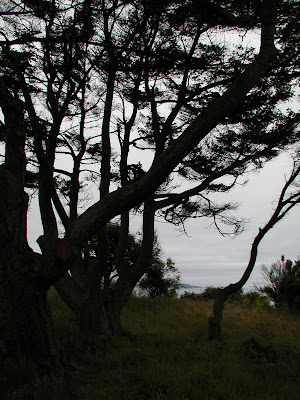 A tangled web of trees darkened the mid-summer's gloom... 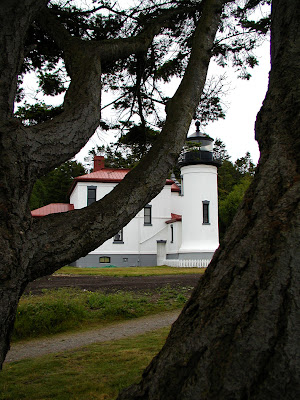 The lighthouse appeared through the woods.
Posted by John Nez at 9:29 AM 3 comments:

Well here's my kitty. I'd tell you her name, but that would allow you unfettered access to every online account I have. So she will have to remain known as merely 'kitty', here. Being a cat of distinction, she has been immortalized in any number of children's books.

This photo finds her busily sleeping away on one of the lovely quilts made by my lovely spouse. In this regard she is an excellent role model. 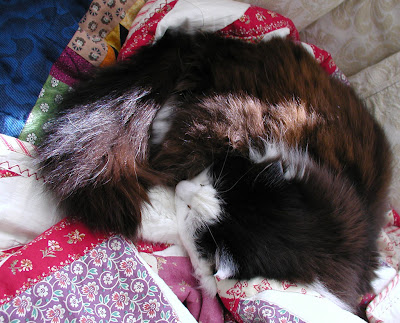 I suppose life is getting a bit boring for her, since it seems her favorite 'Seafood Supper' dry cat mix is unavailable in the stores anymore. Now her choices are whittled down to 'Hairball Formula' (like that sounds appealing...) or 'Active Maturity'. That sounds tasty.

Active senior cats... that's a good one! Bingo anyone? LOL!

Just imagine being stuck having to eat 'Hairball Formula' day in & day out. Mice would start looking very scrumptious. Though I've never actually seen her eat a mouse.

She did bring a live mouse in one evening for a rollicking game of 'Mouse Hockey'. Mouse Hockey is played by the cat owner with a broom. The goal is to sweep the mouse out from under the couch and out through the opened door without allowing the mouse to flee to distant unknown parts of the house. It's a very difficult game... calls for split second reflexes and nerves of steel.
Posted by John Nez at 8:04 AM 6 comments: 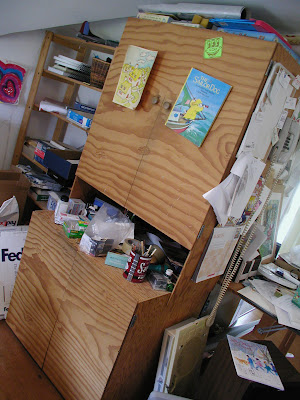 Brain has turned to plywood.

That's right. Brain turned to plywood. Nothing much to say. So I'll let the furniture do the talking...

I've noticed that about half my studio furniture is home made.

Here's one of my old favorites. Combination junk holder and paper shelves. The junk part is my favorite. It's entirely filled with the 'miscellaneous' category. That's the most important category of all, I think. 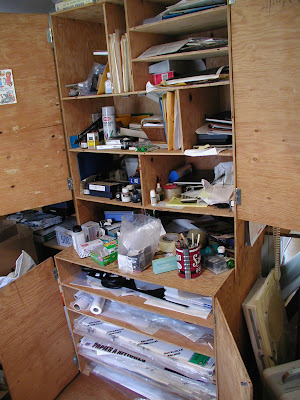 I was thinking of doing a whole series on all the 'miscellaneous' drawers I have accumulated.
After a while it's all miscellaneous. And luckily there's more brain-free plywood to blog about too...

But I imagine the blogging slows down in the summer anyhow...
Posted by John Nez at 10:21 AM 2 comments:

I'm experimenting with making movies to show how I create illustrations. I figure if I ever do presentations, it'd make for an interesting mix in the digital slide show. There's no reason a digital slide show couldn't include movies these days. It's all done in iMovie, which I find is very fun to work with.

The music is a bit sappy, but that can change. I tried the 'Ken Burns Effect' on the still photos... that's always interesting.

I could imagine making movies about the rough sketches, the finish pencils, making changes, using InDesign... and more of a step by step process of how it'd all be done. I'll definitely need better lighting and a tripod. It's hard to paint with one hand and hold a camera with the other!

There's just something about watching an artist at work...
Posted by John Nez at 4:24 PM 11 comments: 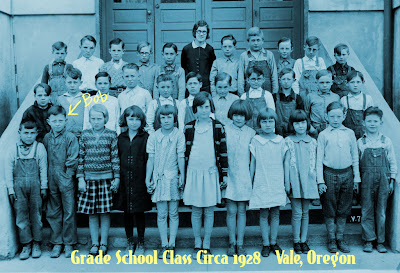 The clouds were heavenly, Sunday afternoon... when Grandpa Bob died. The clouds rarely ever look the way they did. Heavenly cumulous clouds streaked with black tears across their tops. And shortly after his passing, the clouds darkened and rained. It was a mercy, as his last weeks have been awful in every way. Home hospice was his final end... much better than some damn hospital. With seven children, there was one to volunteer for each day of the week.

Born in 1921, Grandpa Bob had a hard scrabble childhood in eastern Oregon, orphaned from a broken family. As a school boy in Vale, Oregon, he once helped sneak a cow up the stairs and into school on Halloween.

Bob came to Seattle to college to become a mechanical engineer. Nothing he liked more than building boilers. Copper pipe and electric cable and slide rules... that's what he liked. Boiler plate with rivets and practical things.

His work was also his very large and wonderful family... all still living nearby. I married his oldest daughter.

When they'd go camping, three of the kids had to sleep under the car since the tent wasn't big enough. With seven children and 10 grandkids, it takes two tables with extensions to fit everyone in at Thanksgiving and Christmas. His family was Bob's riches...

I know that Grandpa Bob's up in the Big Rock Candy Mountains today... cuz that's one of his favorite songs... 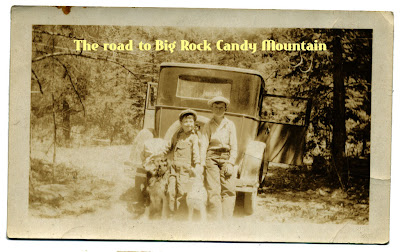 This movie was a revelation for me! About all I'd seen of Charlie Chaplin are those 10 second clips of his greatest hits. What a delight it was finding this full length movie. The pace is so easy and delightful. It was the last 'silent' film he made (1936), though it's odd because it does have bits of talking sound. It's an odd logic where radios can talk with sound but people only talk with subtitles. Makes perfect sense somehow. Chaplin also wrote the music... which is just right.

Paulette Goddard is the perfect street urchin companion to Charlie. It's hard to find that kind of kindness & sweetness & joy in a movie star these days. It's easy to see how she stole the heart of a nation. In this scene she & Charlie imagine a dream house... though in fact they're really living in a shack.

I like watching old movies for all the secondary things in the background. I think it's a marvel to see how fences were made in the 1930's and how telephone poles looked 50 years ago... what coffee pots and wallpaper and sinks and lamp posts used to be like. But it's escape mostly. For the first time in history, people can escape back 100 years to a land of real time images from the past.
Posted by John Nez at 8:05 AM 4 comments: