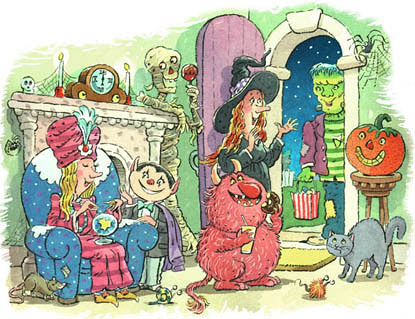 Almost that day already... and I don't think I've even bought any candy yet.

Oh well, since anyone knocking on my front door has to climb up about 17 steps... it kind of cuts down on the trick or treaters. So the smart child knows that to maximize their trick or treating, it makes more sense to work the other side of the street, where there are no steps to slow them down. It always seems like fewer and fewer little goblins come around every year.

This illustration appeared in Owl Magazine a couple years ago. It was one of those assignments that was just perfect to do. Can't hardly go wrong with Halloween.
Posted by John Nez at 1:56 PM 3 comments: 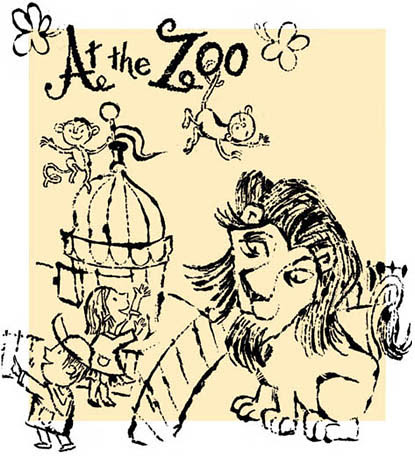 It all started innocently enough with a new idea... (which I got while watching TV of all places). But it turned out really Jazzy!

Now I've finally got some samples of that new inspiration that I mentioned last week.
What are styles? They're like music I think. That'd be a good analogy.

Most of my artwork is quieter and more subtle... woodwinds, violins & violas... an acoustic guitar.

But this new line idea came out all saxophones and trumpets. It's very brassy and unpredictable and Jazzy. Mostly it's the black line that's so strong and works against the bright colors and patterns. The line looks great just all by itself. It occurred to me I ought to try some displaced cubist color blocks behind the line too. 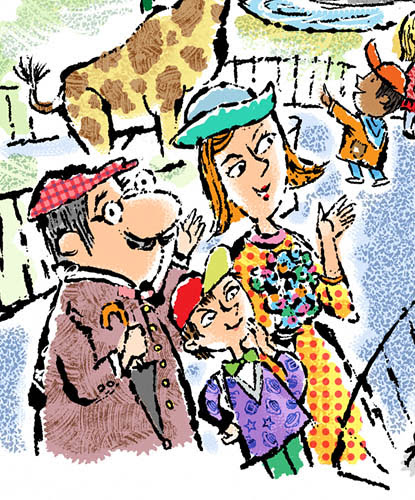 I'll still keep my quiet and charming illustrations... but it's good to improvise and go really wild sometime. Loosening up is hard to do and good for an artist I think.

Jazz is very appropriate for this style, since it's really a reflection of illustration styles from the 1950's.

I think lots of today's styles hearken back directly to the 50's. I'm amazed when I see old 1950's movies on TV that the clothing and hairstyles and glasses all seem so contemporary. It also makes it hard to find a pair of round eyeglass frames in a world of all square styles. 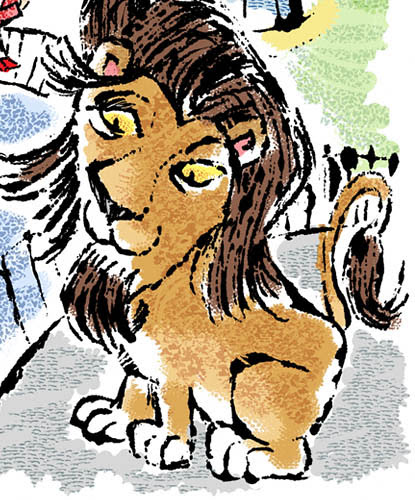 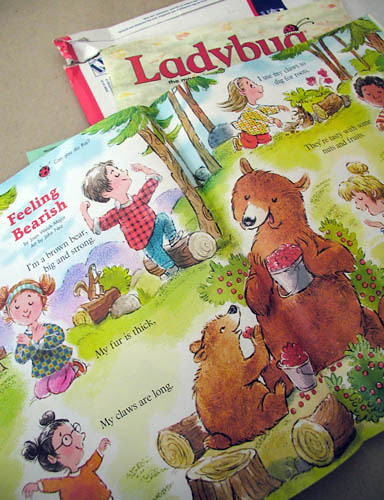 I knew exactly what was inside that fat envelope on the back steps. It weighed about a pound and it could only be one thing. It was half a dozen issues of the November Ladybug Magazine and I'd been thinking about it lately... wondering how it was going to have turned out.

Anyhow the printed version came out just as I had hoped. I guess it's like waiting for the final results of an experiment... only you have to wait 5 months. This painting involved real pencils, photoshop, the Epson 2200, Arches 140lb CP watercolor paper, real paints & pens & pencils, my Umax scanner and more Photoshop. It sounds complicated, but it's really lots quicker than just plain painting. And with much more control at every step. 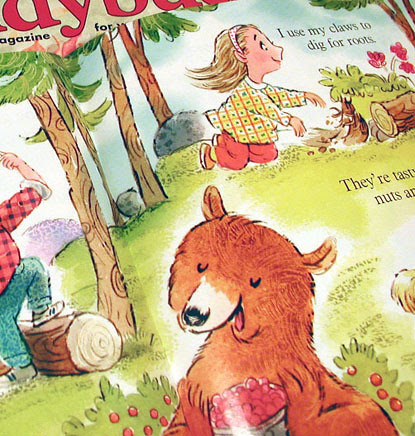 Although I generally think it's best to forget any project as soon as it's sent off to the publisher and move on the next... its nice when you're pleased with the final printed version. Especially when you're a Style Hound like me who's dreaming up a whole new style about every 7 days. Hey... it's not my fault... Photoshop and my Scanner made me do it! Those two can be very seductive and persuasive.

Must be this bracing autumnal air that energizes one's imagination. Or maybe it's time to hibernate... 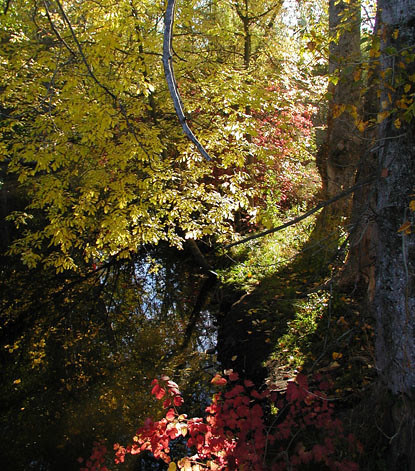 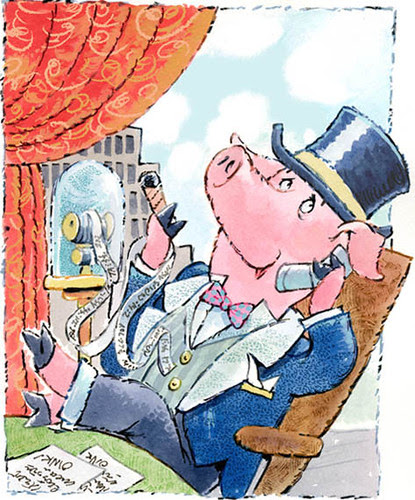 Why? Because sometimes art just gets too exciting for it's own good... that's why. Just breathe into that brown paper bag until one calms down. Making art can be exciting! Sometimes a collusion of unexpected events coalesces to form new possibilities undreamt of in our previous philosophies.

I suppose it's okay when you have those breakthrough moments... but they can be unkind to one's sense of balance and planned out momentum. They just happen on their own and take their own direction. Anyhow, everything fell into place exactly as I had hoped. Ain't that grand when that happens?

Often those months of brooding and unease can be the most productive of all. Though to all outward appearances one might appear to be an idle good for nothing... in fact inside the artistic spirit is metamorphosing into something new... something never before possible... something no conscious effort of the will could have forethought.

The Pig is from a story of mine... as yet unshown to any editor. What do editors matter? He's got nothing to do with my paper bag either. He's just a big Pig... though I still like his story a lot. Knock on wood and all that... Oink! Oink! Oink!
Posted by John Nez at 7:24 PM 4 comments:

Ask not what your software can do for you... 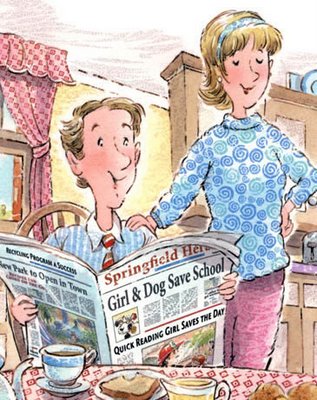 'Ask not what your software can do for you... ask what you can do with your software'. These immortal lines were recently typed by John Shelly, an online artist acquaintance who lives in Japan, though he's an englishman. I think that line neatly sums up the entire issue of digital art and what and who it's good for.

I'm of the persuasion that digital software is great... but not an end in itself. I still think the lowly pencil rules. And I'm afraid I'm even largely in the camp of preferring the look of traditional mediums of paint and ink and pencils on the rough surface of watercolor paper and all the variations they can achieve. Something to do with the complexity of the surface or maybe it's just conditioning. I read a quote from Seymour Chwast to the effect of "the computer is a great place to process art, but a difficult place to create art". I know what he meant, I think. I still like my pencil on paper the best.

In any event, I'm lucky I can do either one... or both... and happily. The picture at the top is from 'One Smart Cookie'. Maybe, people might wonder... "HOW did he do that?". Clue: It's all painted on real watercolor paper. Trade secret! LOL!

InDesign has been one of my newest discoveries. I think they ought to call it 'Dummymaker'. What fun to piece together a book like this... saving scads of time and with unbeatable flexibility. Need a different page size? Takes 2 minutes to resize the book. Need a new font?... click, click, click. All done. I find the buffing is really where it's at with InDesign. By 'buffing' I mean the ability to fine tune each page to match the image. It's quite a different experience from just writing everything in one text document.

All the same things can be done with just photoshop alone, except one would lack the ability to print out multiple pages and scroll through a story with ease. Anyhow, I'm always playing around with new techniques... figuring out what new things I can do with my software. 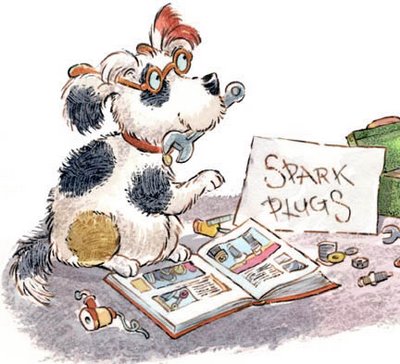 Ah... yes, the spark plugs. With the Cookie's help I too have recently replaced the plugs, wires and distributor cap on the trusty volvo. It's always so empowering to fix something so it's like new again. All it takes is overcoming ignorance... and a few tools really.

And of course, without a car, one could not go on autumnal drives through the bucolic countryside... savoring the pleasures of the season. Cows, pumpkins, barns, rivers, wooded hills, bridges, cornfields... all the usual stuff. 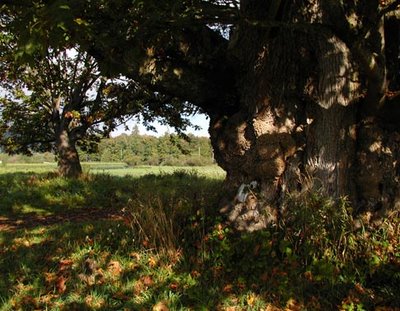 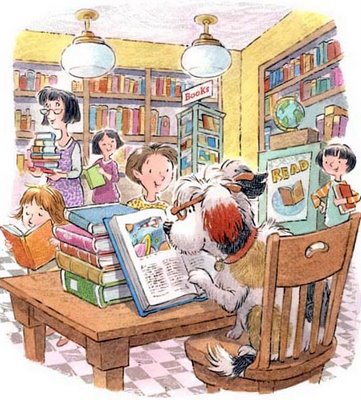 "Cookie spent lots of time in the library. He read books about pirates, rocket ships, and dinosaurs. Detective stories were his favorites."

That's one of my favorite lines in 'One Smart Cookie'. I'm so glad it didn't get edited out since it doesn't really carry the plot too much, but there's just something about it. Maybe it's important because it shows Cookie getting lost in a book... filling his doggy head with knowledge about the the world around him. I guess I wanted to point out the riches that can be found in a library... and in this particular case it took the family pet to discover them.

Anyhow, it all started one morning when I read a title to an online post in a business forum. The post title was 'Good read, Dog'... and that was all it took. Something connected in my brain in a way I'd never have been able to predict, inspiring the story that shortly became 'One Smart Cookie'. Twenty minutes later most of it was all written out.

Most of my stories happen about like that. Just a single word or phrase that sets me off and it's almost like I'm jotting it down as fast as I can after that. But turning this story into a real book took much longer. I've got dozens and dozens of stories all written out... that's the easy part. 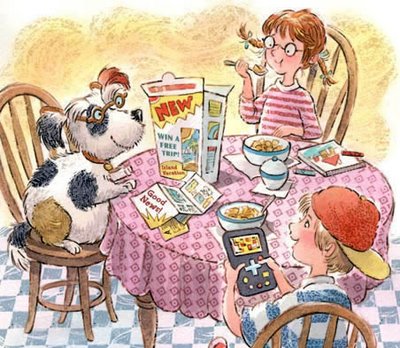 To wit... here's the chronology of 'One Smart Cookie' since it's odd beginnings:

1999: wrote original story inspired by the title to an internet post
1999: did a rough dummy and sent it out to three houses
2000: had a favorable response from one editor who suggested it needed more development and a different ending.
2001: rewrote ending and resubmitted... never heard back.
2001 - 2005: September 11th sort of brought everything to a total stop. I never did hear back from the first editor.
2005: I finally decided I'm never going to see this book in print if I don't just start sending it around again.
2005: reworked the dummy with InDesign... using same art but used a different and more sophisticated packaging. InDesign works wonders for dummies!
2005: sent out story to publisher A ... waited 5 months... not quite right for them.
2005: sent out story to publisher B... sold in 1 week!
2005: was given 6 months to do finish art. Worked through Christmas Holidays, which is about par for a freelance illustrator.
2006: delivered finish art.
2006: finally appears in print!

So... in this line of work, instant gratification it's NOT!

I don't know if I've done a blog post about InDesign, but I ought to. It's the greatest software ever for putting together a book dummy.
Posted by John Nez at 3:27 PM 4 comments: