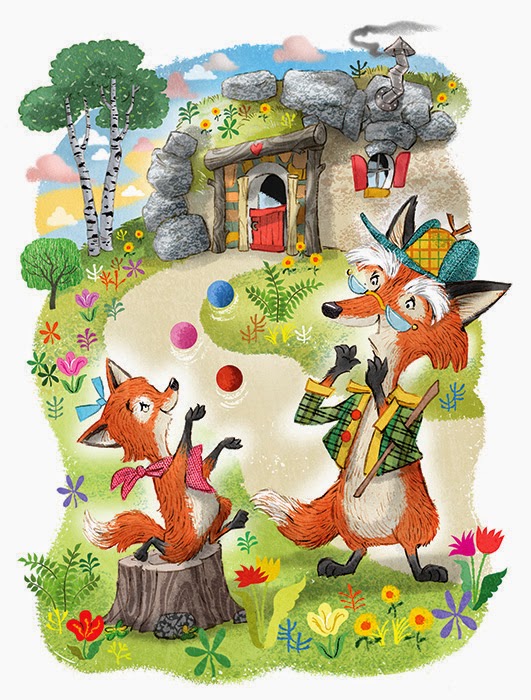 Here's a sneak peek from my new book.

I liked the storybook feeling that turned out on this page. There's an old fashioned decorative quality somehow. The fabrics are hand made... maybe that's it.

I think in general the world longs for storybook worlds to live in. I know I do...
Posted by John Nez at 8:42 AM No comments: 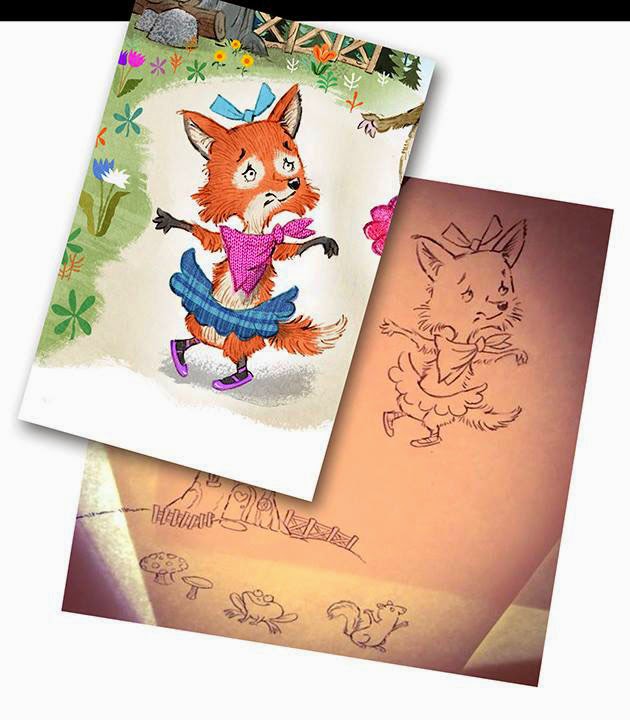 First comes the pencil, which is the most important... and next a suitable color with texture is added. What you don't see is me making about 147 changes to every combination of colors, shapes, patterns and textures.

And then it's done!

Here are some of the different color designs I tried for little Fox's house in the woods. It's supposed to show as a movie though it started as an animated GIF.

I read that if you post an animated GIF to Twitter it is turned into a movie. So I tried it and it works... then I downloaded the movie and that can be posted onto FB. The things one never knew!

This only plays once, but the GIF repeats over and over.

My Uncle Ed the illustrator

I discovered online, entirely by accident, that my Uncle Ed had illustrated a little golden book that I'd never seen before - Captain Kangaroo and the Panda.

And a few weeks later it arrived. My Uncle, Edwin Schmidt, was an illustrator who lived outside Philadelphia back in the 50's and 60's. He was my hero. I used to see his name in print in various books and I'd think he was famous. He always sent the best Christmas presents. He went to the Museum School in Philadelphia and he lived in Valley Forge.

My Uncle Ed's wife was a painter too - she was also a model and covergirl on some magazines. She moved to Camden Maine later. I did get to meet her when I was living in NYC. She was sooo thrilled that I had succeeded an illustrator. 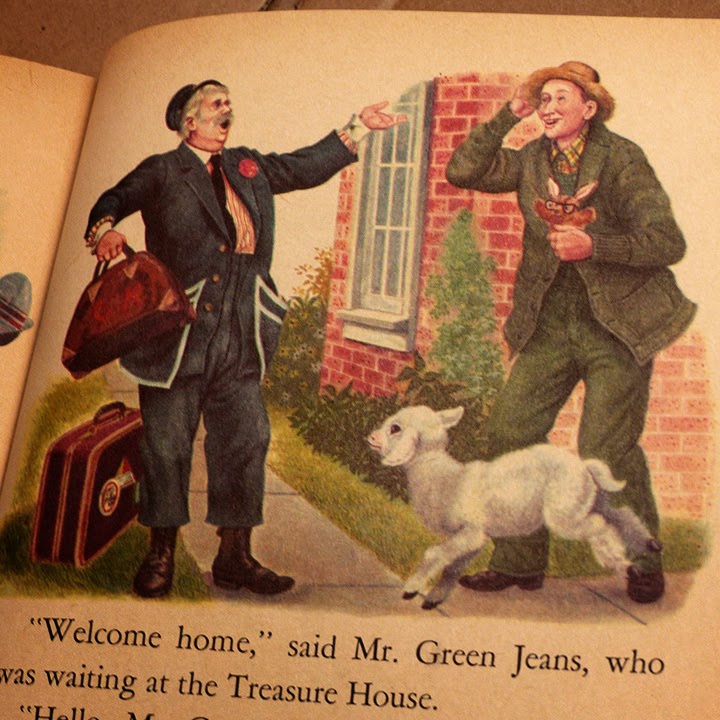 I only met Ed once, for an afternoon when I was in high school. But it made a lasting memory.  Sadly, neither of them lived to the age of 50. 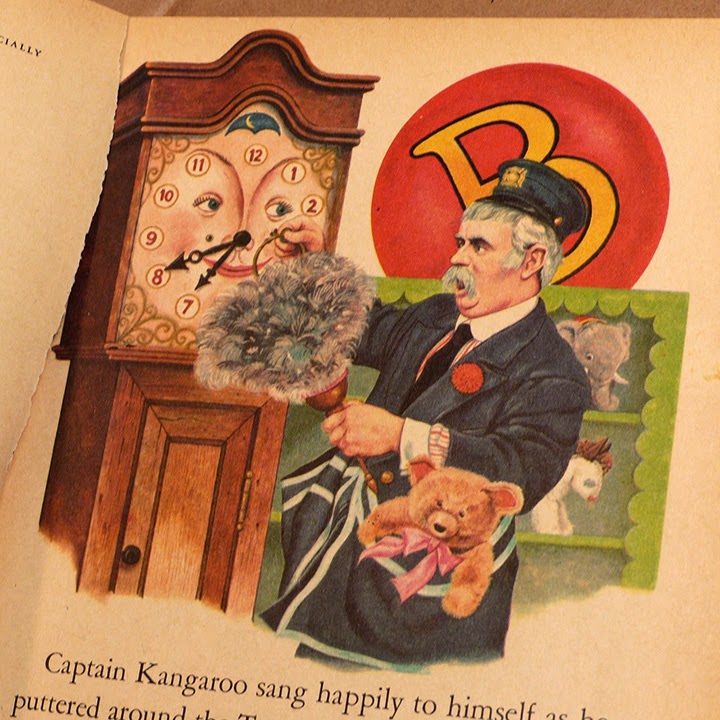 It's ironic that I recently did a panda book too. I was thrilled to see that both my Uncle Ed and I were listed in the Little Golden Book 50th Anniversary directory that came out a while back.
Posted by John Nez at 6:11 AM No comments:

Welcome to the Writing Process: An Author/Illustrator Blog Tour

Thanks to Shawna Tenney for inviting me to be in a blog tour. It's fun connecting with other bookmakers in my profession. Just now I'm working on a book set in the woods, which is a very fun world to escape to.  It's about a fox family and it's set in the deep woods.  So I get to make up the entire woodsy world.  I have a school scene with raccoons, beavers, badgers, squirrels and owls.  Maybe it's the Beatrix Potter syndrome coming out?  Anyhow it's loads of fun. I love drawing anthropomorphic animals... as I did with 'Peter Panda Melts Down!', where I created a world with pandas, cats and bears.

But then I think of drawing and making pictures as basically fun. Drawing and coloring - that's the world for me.

2. How does my work differ from others of this genre?

I'd guess if anyone can recognize my work, then I'll have succeeded in differing myself from the other 15,000 children's illustrators out there. I think most illustrators basically just make their art - so that's their style.  So anything different must be me - or my style. The key is to try to make the work contain the basics involved in art - things like draftsmanship, perspective, design, tasteful color. The designing of any illustration usually is limited by the page and text, so often it's a challenge to fit the artwork into the remaining space.

Here's an insightful series that shows how a character was developed from my recent book 'Spot Saves the Day'.

Inspiration is mysterious - there's no two ways about that. I write and write and write, whenever the inspiration strikes. Some of my stories start out on an envelope or back of a grocery list. Sometimes a particular phrase will catch my mind and that leads to the motif of the story. Usually the first line kind of jumps out in a declarative way and the book follows along.

Sometimes a story will fall together wonderfully complete - other times it only comes out halfway and gets stuck. But only one out of maybe 10 or 20 stories I write ever gets published. I think that's average for most writers. Anyhow, one never writes so much as one re-writes. The same rule applies to making art. I never just draw as much as I re-draw.

Here is the dummy to 'The Cranksville Cookout' along with the main set of characters.

4. How does my writing process work?

The working process begins when I take the text and divide it up into 32 page sections and then paste that all into Indesign. When art is added I'll see the many changes that need to be made. Usually half of the text is rewritten.

It seems so obvious when you see the text with the art included. Everything changes - often even parts of the plot seem obvious to change. So it becomes a fun struggle between the words and pictures, like a puzzle. It is true that a picture is worth 1,000 words.

Also I need to add that I always use Indesign to create dummy books. It has so many advantages over the old paper & tape method I used to use. With Indesign it's easy to swap out drawings, resize, reorder pages, change text, save different story versions and export the art.

And Indesign does a brilliant job of keeping everything organized with links. Often I can scarcely even find a particular piece of art, but Indesign keeps track of it. So Indesign and Photoshop are my main bookmaking tools.


Anyhow, it is an intriguing process. It's basically just puzzle solving, that's all.  And there's nothing a monkey likes more than a puzzle.

Next week for the book maker blog tour I've tagged Stephen Aitken, a great painter, bookmaker, and traveler to exotic faraway lands for the next installment of the Welcome to the Writing Process: An Author/Illustrator Blog Tour.

About Stephen: (who spends most of the year in Nepal by the way!)

I have been drawing and painting for as long as I can remember. My dad picked up a hitch-hiker in my hometown Ottawa who turned out to be a brilliant artist and he gave me private classes from his home for most of my youth. The ride home on his motorcycle gave the sessions an extra allure. After completing an honors biology degree with a minor in Fine Arts, my artistic hemisphere was reinvigorated by a 2-year stint at the Carleton School of Architecture. I went on to a career as a biological illustrator, then publishing, then editing, then writing…you get the idea. I have been creating my own children’s books for the past 15 years, many of them about the natural world and the rich diversity of life on our planet.

Posted by Unknown at 6:50 AM No comments: