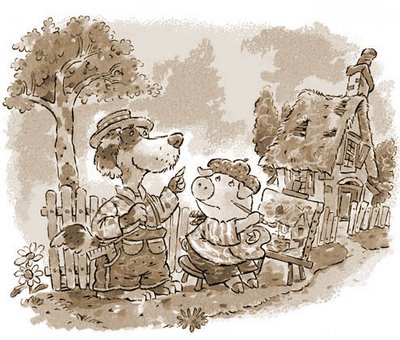 I think life as a freelancer... selling art and ideas, leaves many more shady grey areas in the balance of rationality than some other professions might.

Just dealing with the artwork itself can seem like temporary insanity. It's because it's all so subjective.

For instance it's quite common for an artist to finish a piece of art and think it's totally perfect... only to realize 2 weeks later that they wish they had painted it a bit differently. Luckily, it can also work the other way... and you decide a painting is really much better than you first thought.

It's very perplexing when subjectivity shifts from week to week.

Then there's the classic artist joke: There once was an artist who was staying as a guest at the house of an old friend. One of the artist's paintings, done 30 years before was hanging over the mantle. In the middle of the night, noises were heard downstairs. The host fearfully crept down the stairs to investigate.

There in the living-room was the artist... up on a stepladder, lantern and paintbrush in hand, putting the last correcting touches to his painting from 30 years ago!

Tell me that's not half crazy... but I KNOW exactly where that story is coming from.

Anyhow, so that's just the Art part. Next comes the Freelancing part, which is equally subjective and unpredictable.

That's where you have anywhere from 0 to 5 clients all calling and setting different overlapping deadlines. All totally unpredictable as the freelancer tries to juggle time and the projects they're working on. That can drive you nuts too. And it's sometimes hard to tell which is worse... having 5 clients or not having any.

In any event, the little painting above is from one of my unpublished stories. It's about a Painter who gets lots of advice about just how he ought to be painting.
Posted by John Nez at 1:09 PM 7 comments: 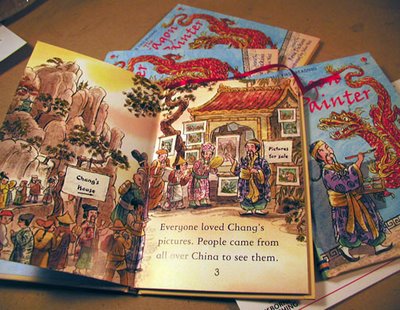 I just got my copies of a book I did for Usborne, 'The Dragon Painter' and I'm very pleased with the print quality. In fact I'd go so far to say that it's most likely the best packaged and printed book I've ever done the artwork for.

It means so much to an artist to have their work presented the way they painted it... as often that's not the case.

But I have to say, on this book the printing is just perfect... it has sewn bindings and they did a wonderful job of everything... even the endpapers. And a real first, there's even a little satin red ribbon bookmark that comes with the book.

I was very pleased to see how my digital/real media techniques seemed to print up very nicely too. Believe me, it's not every book that leaves the artist so pleased with the printed copy.

It was a fun story, a folk tale, about a painter who paints dragons that come to life.
I had a great time doing the research for all the chinese decor. I found the Emperor in a book about an ancient chinese gardens. I had to make sure I changed the pattern of the designs on the clothing, since I have no way of knowing what they might actually mean or say in ancient chinese!

I previously uploaded some of the artwork from this book back in January. 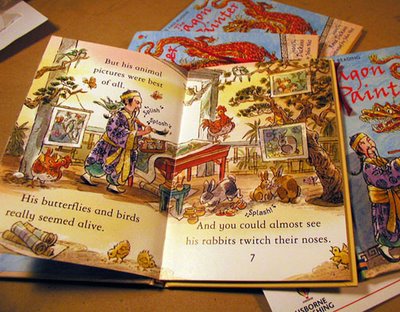 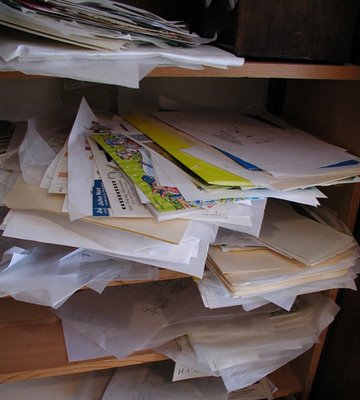 Ideas... what would we do without them?

Probably we'd be a lot happier... only dumb and happy. Sort of like my cat I imagine, an enviable state of being for sure. Nap time 22 hours a day with breaks for breakfast and dinner.

However, one of the drawbacks of being an artist or writer is that you're always hatching ideas. Most of them just vanish and get replaced by the next idea. But sometimes they're ideas you just have to write down.

The back of the grocery list is one place I've often resorted to, when struck by an idea out shopping. The backs of brouchures... any kind of paper. Then when I get home I toss those ideas into my idea pile... where they collect dust as I busy myself making a living drawing pictures to demanding deadlines.

Every now and then I pick some sketches out... and maybe work them into a book or project. 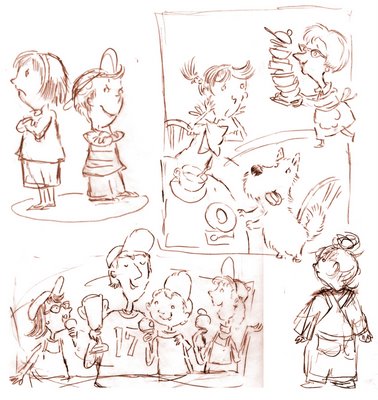 Anyhow, above is a photo of my idea pile. It's fun to blow the dust off the top and leaf through the dozens of story leads and drawing inspirations in there. I keep these piles like treasures... I know there's at least half a dozen stories in there and it's always good for new directions and inspirations. 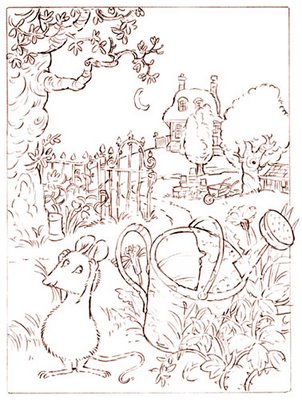