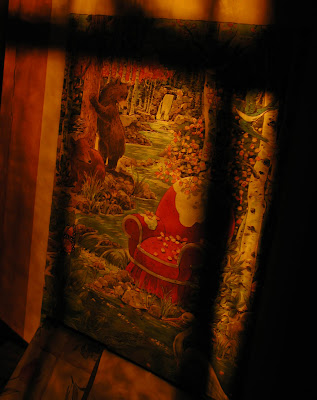 My other movie choice this weekend is Woody Allen's debut film, 'What's Up Tiger Lily?'. Very funny! The beauty of this movie is that it philosophically proves a point that anything that happens in life can be considered to mean almost anything in any number of ways. One might as well choose an entertaining script. Like Garrison Keillor says, "God writes mostly comedy... only people don't realize it."
Posted by John Nez at 11:26 AM

I never saw either movie, so now I have something to look forward to.
KI think Garison Keillor is exactly right - only I think it's more satire than comedy. Or if it's comic, it's pretty dark. I remember thinking that for the first time when that woman who saved the lions in Africa was killed by one. I was about 12, (and in Catholic school) and decided that if there was a God, he/she/it had the strangest sense of humor.

But I think humor is the achilles heel of grief. I was in the most abysmal dark mood before I put on that silly Woody Allen movie, and by the end of the movie, I was all cheered up.

So I'm grateful for that!

I am trying to cheer up my son, who has broken up with his girlfriend of four years, and is despondant. The only thing I could come up with were all the dreadful stories of my own break-ups. They are terribly funny now - at least they made him laugh.