Barking up the wrong trees... 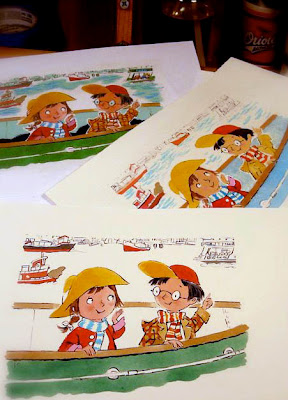 One advantage of being a freelancer is that you can hop on the bicycle whenever the sun is shining. Also I have been sorely neglecting ye olde blog. But that's okay, since I don't figure anyone actually reads it much anyhow.

In the meantime I have been busy deciding which tree to bark up artworkwise.

Finally, after much kerfuffling, I settled on the characters for a new book. That's always the stickler... This has been a classic case of the 'pre-book' jitters. I guess it's sort of a precipice, where the artist figures they ought to decide to change things now or forever cling to continuity. 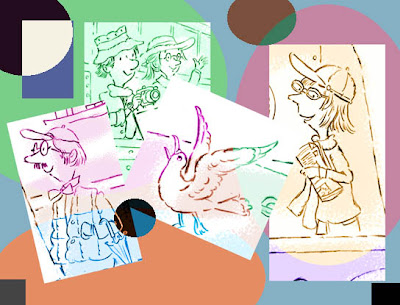 So I have jittered and re-jittered umpteen times. All to a worthwhile effect I must say. I have been experimenting to no end with new techniques for painting on various surfaces... sanding, gessoing, different layers, thick, thin and on and on. Very educational. It all brings to mind that saying of Thomas Edison's about invention being 1% inspiration and 99% perspiration. So true.

Usually I have to redraw an idea for a character 25 times... never stopping to realize all along that I'm barking up the wrong tree.

I really busted my backside reworking each version... and my inner critic was merciless. But I'm glad he is such an unrelenting S.O.B. because finally I came up with a new direction that I like much better. Sometimes an artist can be as dumb as a doorbell and not have a clue as to what they're doing wrong. And usually their friends won't tell them either.

Finally I figure out the right tree... then it's simply a matter of scrambling up to arrive where I really wanted to go all along.

That's how it works for me at least...

i read your blog john! dx.

Probably more people read your blog than you think. Some see it on their RSS feed... I see your posts show up on Jacketflap.

I always enjoy seeing your work and the process behind it. Right now I am encouraged to hear that you draw things over and over. I thought I was the only person to do that. : )

So is your new book one that you have written? Any hints on what it's about?