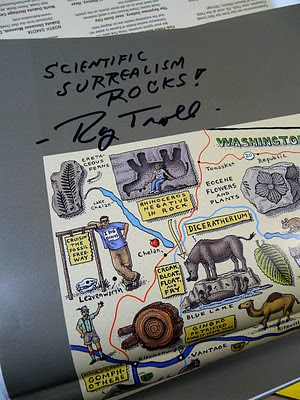 Lucky me! I had the chance to attend the museum opening of the new Ray Troll exhibit at the Burke Museum in Seattle.

This is one fabulous show. I'd say it's easily the best museum show I've ever seen at the Burke... (or even in all of Seattle). I can't think of an art show I've ever found more fascinating. This show will NOT put anyone to sleep! 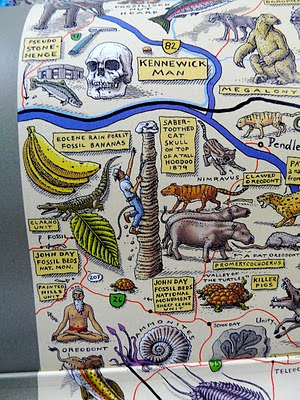 What's not to be fascinated by? Astonishing fossils... fabulous artwork. And the amazing Ray Troll was there in person along with Kirk Johnson, the knowledgeable author. He's also the director of the Denver Science Museum.

Both the author & artist were on hand to deliver a scholarly, yet very fun talk on the opening as they strolled around the gallery.

I was amazed it wasn't more crowded. I felt like a nervous groupie when I got to shake Roy Troll's hand... but then that's how I felt when I met Maurice Sendak.

'Riding the Fossil Freeway' is an amazing book... nearly a decade in the making (and it shows). There's also an awesome huge map of the fossil filled West. Ray signed my wall map 'Scientific Surrealism'... which I find to be a fascinating idea for an art genre. 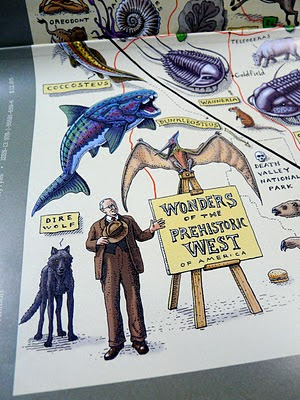 Ray said it took him years to figure out that 'scientific surrealism' was actually what he had been doing as an artist. Makes sense to me. I can easily understand how an artist might spend years before finally crystalizing exactly what it is that we do. I know I've got lots of half-baked directions waiting for a good descriptive title.

I had read 'Riding the Fossil Freeway' twice the summer before last. I think half the reason I liked the book so much are all the stories about camping and driving through the outback of the West. I've been to many of those locations. It must have been a great road trip, driving the outback of most of the West.

Seeing the artwork all together in the museum on the wall is very powerful. There are way-cool gigantic hand-painted images from the book that line the walls. The show will be open all summer, so anyone in Seattle really must go, imho.
Posted by John Nez at 12:30 PM

yeah, that looks like a cool show! Can relate to the nervous handshakes!

Glad you got to see his work. He came to an event I had in Ketchikan and I was amazed at how open and supportive he was. I think his brain is a different size than mine and has many more connections. We are all fans.

Wow, that would be a wonderful show to see!